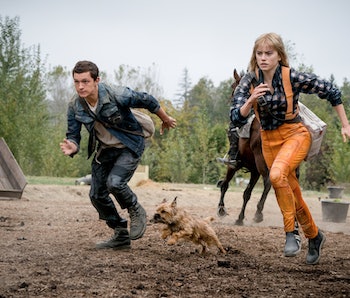 This article about the film Chaos Walking was originally published on November 19, 2020 and updated on January 1, 2022 following the movie’s release. Read on for the original article, with some new changes to reflect the latest updates on this topic.

After years of very little forward movement, Chaos Walking finally got a release date. Based on Patrick Ness’ 2008 young adult novel The Knife of Never Letting Go (the first in a trilogy), the film starring Star Wars' Daisy Ridley and Spider-Man actor Tom Holland was originally acquired by Lionsgate in 2011 and has been through the production wringer ever since.

The film’s script has been revised several times since the original draft was written by Charlie Kaufman, who left the film in 2014. Three years after production wrapped, Chaos Walking finally got theatrical distribution. Here’s everything we know about the mysterious dystopian sci-fi movie, including its official release date, the plot, trailer, and full cast list.

What is the release date for Chaos Walking?

The film had a debut theatrical release in South Korea on February 24, 2021. It had its United States debut a couple of weeks later, on March 5.

The film was initially scheduled for March 2019. However, Chaos Walking underwent extensive (and expensive) reshoots in April 2019 after testing poorly with audiences. Doug Liman is credited as the film’s director, but props should also be given to Fede Álvarez, who directed the reshoots. The movie was originally scheduled to release on January 22, 2021, but was delayed due to the COVID-19 pandemic.

What is the plot of Chaos Walking?

Here’s the synopsis, per Lionsgate:

In the not too distant future, Todd Hewitt discovers Viola , a mysterious girl who crash lands on his planet, where all the women have disappeared and the men are afflicted by “the Noise” – a force that puts all their thoughts on display. In this dangerous landscape, Viola’s life is threatened – and as Todd vows to protect her, he will have to discover his own inner power and unlock the planet’s dark secrets.

In Ness’ books, Todd finds Viola after he’s sent away by his surrogate parents to find the patch of silence that turns out to be her location (women’s thoughts are not on display in this new world). Viola’s presence confuses Todd because he’s grown up believing that a germ is responsible for having killed all the women. Naturally, something much more sinister is going on, leading Todd and Viola to join forces to find out more.

Who is in the cast of Chaos Walking?

Holland and Ridley play Todd and Viola, respectively. Several more well-known actors round out the rest of the cast.

Is there a trailer for Chaos Walking?

Yes! After a long wait and a brief teaser, Lionsgate has finally released a full-length trailer. Mads Mikkelsen rides a horse in a fur coat and a cowboy hat. That’s what you call a villain with style. Watch it below!

What did critics have to say about Chaos Walking?

Chaos Walking has a 21% rating on Rotten Tomatoes and a score of 39 on Metacritic. The reviews were negative, with many criticizing “poor execution and conventional, underdeveloped characters.”