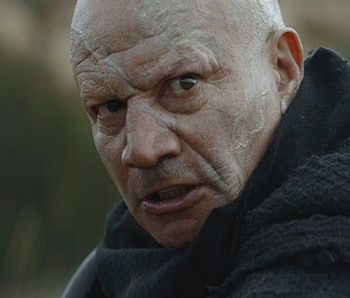 That's why his appearance in The Mandalorian was so welcome — finally, we could see Boba as a person, not just a bounty hunter or the son of Jango. That character will surely carry over into his own spinoff, The Book of Boba Fett, and there are some pretty intriguing possibilities for how his story could unfold. Let's dissect.

Redditor TheMediocreCritic suggests Boba Fett will become a Robin Hood figure in the upcoming spinoff. Despite having been in cahoots with Darth Vader and Jabba the Hutt in the original trilogy, in The Mandalorian he's an upright man of honor. He pledged to help Mando find Grogu and assisted with the rescue even though it put him and Fennec in the direct path of the Empire. He also believes in the sacredness of the Mandalorian armor, if not in the same narrow way as Din Djarin. Boba sees his Beskar armor is a birthright, the last thing remaining from his father — besides all those clones.

In the post-credits scene of the Mandalorian Season 2 finale, Boba kills Bib Fortuna and takes over the late Jabba the Hutt's crime empire. This man of honor is now a mob boss, and that means one thing — a noble mission. This suggests The Book of Boba Fett is shaping up to be a mythic tale of a man who helps those down on their luck in the aftermath of the Empire's fall.

The title of "folk legend" fits Boba, as his face is the most common in the galaxy, given that it's shared by countless clone troopers. The point of Robin Hood and other legendary beings is that there aren't defined by their appearance but by their noble actions or a distinct outfit, two things this version of Boba has in spades. He also has another prerequisite for the role — a trusty sidekick in Fennec Shand, a Little John for a galaxy far away.

Considering Disney's success with an animated Robin Hood, it's amazing the concept of "Robin Hood but in space" hasn't been used before. But it seems to be fresh territory, as long as you don't count short-lived 1960s Canadian animated series Rocket Robin Hood — and it shouldn't count, because it was terrible. Perhaps Star Wars is just the breath of fresh air this classic story needs.

This shift in character from bounty hunter to folk hero may seem stark, but he's had quite the life so far. After somehow escaping the Sarlacc, he was surely nursed back to health by somebody, possibly the Tusken Raiders. After that, he would feel an obligation to serve the poor, just as Fennec feels an obligation to him after he rescued her from the Tatooine sands.

Who knows, maybe in thousands of years, the children of the Star Wars galaxy will tell the tale of the man who took over Jabba's Palace and turned it into a place of giving.

The Book of Boba Fett premieres December 2021 on Disney+.