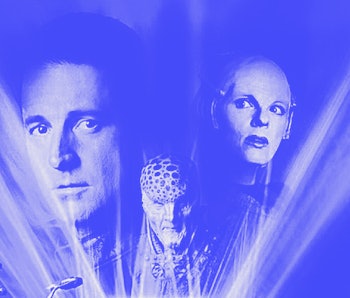 In the nineties, CGI spaceships were punk AF.

The first science fiction TV series to extensively use CGI for all spacecraft and space station exteriors was Babylon 5. Other than The Last Starfighter (which was supposed to look like a video game) and seaQuest (which hid the CGI submarine in murky CGI water), no other sci-fi series had attempted to go full CGI before B5. This wasn't just because B5 was trying to be cool — it was because the show had serious budgetary limitations.

With a budget of about a third of an average episode of Star Trek: Deep Space Nine — Babylon 5 wasn't just the Pepsi to the Coke of '90s Trek. It was trying to do something entirely new — make a new flavor of sci-fi TV. Today, B5 is rightly considered a classic of sci-fi TV, and the forerunner for edgy serialized shows like Battlestar Galactica, The Expanse, and even Star Trek: Discovery. Without the brave innovation of B5, modern sci-fi would have turned out very differently. All five seasons of Babylon 5 just hit HBO Max, and the series got digitally remastered in the process.

If you're new to the show, here's what you missed, and why you should get into B5 now, on HBO Max.

Created by J. Michael Straczynski (Sense8), Babylon 5 was pitched to various TV networks as a sci-fi "novel for television." This means that Straczynski intended for each episode to lead directly into the next episode, with little to no recaps for the audience to help them out. Throughout its five seasons, Straczynski personally wrote the vast majority of the teleplays on Babylon 5, meaning the writers' room, was, for the most part, pretty much just him. Go ahead and look for other teleplay credits at the start of most episodes — with the exception of a few episodes written by sci-fi/fantasy legends (like Neil Gaiman, Harlan Ellison, and Dorothy Fontana) the vast majority of B5 scripts — 92 out of 110 episodes — were personally written by the creator of the series, something that was unheard of then, and certainly not something you hear about now. So, when you know that, Straczynski saying that B5 was like a "novel" starts to make a little more sense. Unlike so much other TV, there were simply not that many cooks in the creative kitchen of Babylon 5.

The premise of Babylon 5 tells the story of the titular peace-keeping space station, which exists in neutral territory in-between several interstellar governments. Earth is only one of these races, although, in a Star Trek-ish move, the Earth Alliance folks do become the de facto moderators for much of the conflicts between the other alien governments. That is until they don't. The beauty of Babylon 5 is that no two seasons of the show are remotely alike because the political status quos of the various races — the Narn, the Minbari, the Centuri, the Vorlons, the Shadows, and yes, the humans — change pretty radically each year. If you think the reboot Battlestar did a good job with this, or that the three seasons of Star Trek: Discovery seem pretty different from each other, Babylon 5 did this kind of epic serialization first. Yes, Star Trek: Deep Space Nine also got risky with more serialized storytelling in its latter seasons, but, Babylon 5 did it first, and more consistently. (BTW, DS9 didn't rip-off Babylon 5 or vice versa. Sure, it was weird there were two serialized space station shows on the air at the same time, yes. But, let's all get over it.)

Obviously, in 2021, serialized TV is the norm, but in the mid-nineties, it very much was not. To put this in perspective, The Sopranos didn't debut until 1999, one year after Babylon went off the air. Other than B5 (and again, latter-era DS9) there simply weren't serious dramas doing serialized season-long arcs on TV at all. And again, when you consider that B5 was literally written by pretty much one person, the uniqueness of the series is staggering. If B5 were on the air right now and operating the same way it did then, the closest analogy would be The Expanse. But, because The Expanse is adapted from existing material, that analogy still isn't quite right. Because Babylon 5 was constantly in danger of being yanked off the air, Straczynski had to find ways to rewrite his massive, epic arcs to accommodate the possibility that the entire story might not get to be told. If some Earth-bound politics seem a little rushed at the end of Season 4, keep in mind, at this point, Straczynski thought Season 4 was gonna be the last season. And yeah, the series finale "Sleeping In Light," which was eventually tacked-on to the end of Season 5, had been filmed the year prior, just in case it was needed as a coda for Season 4.

These kinds of ups and downs behind-the-scenes are somewhat apparent when you watch the show now. You can see the series bumping-up against the expectations of what a TV show was supposed to be in the mid-nineties: A 20+ episode season, that would be easy for a casual viewer to just watch at any time. If the show were being made now, it's easy to imagine it much more compact, with various season-long mysteries teased out in more deliberate, and perhaps, more obvious ways. It's easy to imagine a perfect version of B5 in 2021.

But the charm of Babylon 5 is found in its imperfections. The story of the series exists in a kind of platonic ideal form, just below the surface of a wildly imperfect final TV product. I mean, if you've never watched B5, aspects of the show are going to feel very nineties, and not always in a good way. And, if you can't get over the hair of the Centauri (or the fact that one character is named LONDO and not LANDO) you're going to have a hard time rolling with villains that are straight-up space spiders called "The Shadows."

And yet, if you stick with it, B5 rewards you. Straczynski's writing chops insert dramatic naturalism into what could have been clunky sci-fi archetypes. His literary love also means that various words and names are lifted outright from famous books: The Rangers, and the planet Z'Ha'Dum, and the character of Lorien are all pulled from Tolkien's The Lord of the Rings. Meanwhile, while the scheming telepath cop played by Walter Koenig of Trek fame, is named "Alfred Bester," in honor of the sci-fi novelist who put telepaths on the map, with his excellent novel, The Demolished Man. These are more than Easter eggs, B5 is built on the New Wave print sci-fi of the 60s and 70s, and honors the big fantasy epics that came before that.

The performances are also pretty amazing. Just recently, the world tragically lost the absurdly talented actress Mira Furlan, who played Ambassador Delenn in all five seasons, and, who later went on to fame on Lost. Richard Biggs as Dr. Franklin and Andreas Katsulas as G'Kar are also stand-outs, as is Claudia Christensen as the irascible queer-icon, Commander Ivanova. And of course, sci-fi fans know Bruce Boxleitner as the titular character of Tron, but as John Sheridan, he actually does a little more real acting, beyond just throwing around a light disc.

Yes, some of Babylon 5's big hero epic stuff feels a little old-fashioned. Yes, some of the seasons seem to stretch out a bit longer than they "need to" by our standards today. But, there's never been anything like it before, and there will never be anything like it again. In a world of franchises and sci-fi clones, Babylon 5 truly stands apart, one of a kind, and all alone in the night.