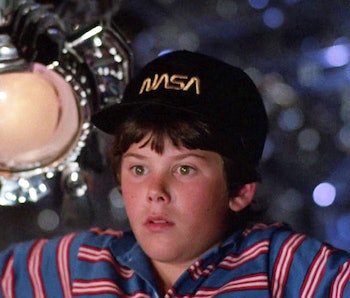 If you were lucky enough to take the Backlot Tour at MGM Studios before it closed in 2014, you'd notice a certain stretch that was a bit quieter than the rest. An unassuming silver ovoid sits on a lawn, propped up with a rudimentary wood structure. It's not very impressive, but this prop played a huge role in the most under-appreciated Disney sci-fi movie ever made. Now, after years of languishing in the Disney vault, it's finally available for streaming.

The Flight of the Navigator is a 1986 alien sci-fi movie that at first seems like a rip-off of E.T., but in reality is so much more. It follows David Freeman, a 12-year-old boy in 1978 who falls down a ravine and gets knocked unconscious. When he wakes up, he finds himself in an alien world. No, not another planet — just Earth in 1986. He remains unchanged, but the world has grown without him. His eight-year-old little brother is now four years older, and the entire culture has shifted.

When his appearance is linked to a UFO crash nearby, David gets swept on a journey as the alien A.I. that abducted him all those years ago loses all its maps — maps that it happened to upload into David's brain like an external hard drive to test its storage capacity. What follows is a clever, heartwarming alien adventure that takes all the best aspects from E.T. and other eighties kitschy science fiction works, but avoids all the life-or-death stakes that make for stressful viewing.

The Flight of the Navigator works especially well when viewed from the future. Just as David is a fish out of water in 1986, the 2020 viewer is too. When a young NASA intern played by Sarah Jessica Parker explains how she dyed her hair for a Twisted Sister concert, David has no idea what she's talking about. A 12-year-old nowadays is probably in the same boat.

Another element of this film that aged like a fine wine is the special effects. There are some... interestingly rendered images of the spaceship flying above the countryside, but the interior of the spaceship is entirely chrome, futuristic, and practical.

The fact The Flight of the Navigator hasn't yet gotten a reboot or sequel is a tragedy, and although many attempts have been made, there's no hope for one on the horizon. Still, David's true journey is too intriguing to reveal here, but over the course of the film's breezy 90 minutes, it reveals itself to be the ultimate in escapist science fiction. Escape to the 1980s while David escapes from his 1970s suburban life.

The Flight of the Navigator is now streaming on Disney+.

More like this
Entertainment
8.6.2022 3:00 PM
'Nope' editor Nick Monsour reveals the secrets behind Jordan Peele’s sci-fi monster
By Jeff Spry
Entertainment
8.7.2022 1:00 PM
ILM legends reveal the sci-fi movie that changed everything wasn't Star Wars
By Ryan Britt
Culture
7.28.2022 11:30 AM
You need to watch the most underrated sci-fi thriller of the '60s before it leaves HBO Max next week
By David Grossman
Related Tags
Share: