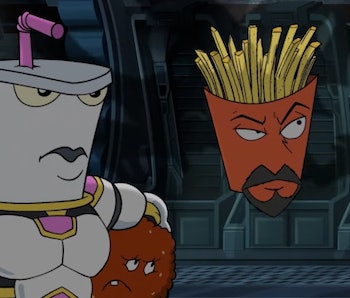 In 1999, two weirdos had an idea: What if they took fast food items and made them sentient and rude?

Over two decades later and the stars of Aqua Teen Hunger Force Frylock, Meatwad, Master Shake, and Carl are still messing around in their new movie, Aqua Teen Forever: Plantasm.

“We ended it nicely and were happy with what we did, but cartoons never die,” series co-creator Dave Willis tells Inverse at New York Comic-Con. “There’s been a little magic to it, there’s a magic part to my life.”

Aqua Teen Hunger Force was one of the first shows to ever come out of Adult Swim, using stilted animation and a ridiculous cast of characters in 11-minute chunks, it kept viewers confused but also wanting more. Willis and co-creator Matt Maiellaro built a lasting legacy that still felt in most adult animation on the channel. You wouldn’t have Rick Sanchez without the incredibly brash, and outright stupid, Master Shake.

“I think I can say confidently, in the 20 years it’s been on, in the evolution of the character, he’s learned nothing,” Shake’s voice actor Dana Nyder said. “He just has a shorter temper. He’s had devolution and learns less.”

The last incarnation of the show, Aqua Teen Hunger Force Forever, ended in August 2015, but the cartoon has maintained some level of popularity since going off the air, thanks to its availability on HBO Max.

“We ended it nicely and were happy with what we did, but cartoons never die”

“The new movie is called Forever, because the show might have been off the air, but it was still rolling and collecting fans,” Maiellaro said. “We just did what we wanted to do and lucked out.”

But Plantasm wasn’t really born out of a viral campaign or a desire in the market.

“I would love to say it was in incredible demand, but it was probably because Covid was happening and they needed animated properties,” Willis said. “I remember working in my backyard and I got a phone call asking if I wanted to do a movie and I said sure.”

The second Aqua Teen movie focuses on lampooning the tech oligarchs of today. In Plantasm, the gang has to stop the corporate overlord Neil and his company Amazin from taking over everything. According to the cast, there’s a significant increase in animation quality (at least for a small increase) and an over-the-top series of sequences that give the characters all the power they’ve ever craved.

“‘It is very satisfying when you see the Aqua Teens performing in a way that they normally think they should,” Snyder said. “It’s a lot more epic, there’s a very clear, big story. It’s very fulfilling, even though they shouldn't be doing that.”

There’s also an interactive element that Willis wouldn’t tease but swore had never been done in an animated movie before. And a few changes to ATHF lore and casting that needed to be updated for the times. Boxy Brown, Meatward’s cardboard buddy who was originally voiced in the series by Willis, is now voiced by Killer Mike.