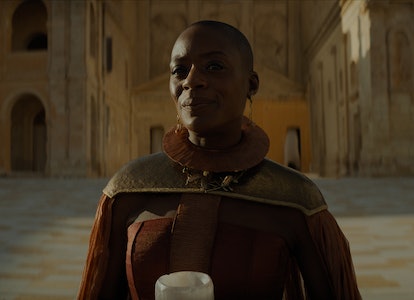 On a faraway moon called The Maiden, the arrogant and manipulative emperor, Brother Day (Lee Pace) believes he’s arrived to quiet an inconvenient religious movement. But standing in his way is the tough-as-nails spiritual leader Zephyr Halima Ifa, played by veteran sci-fi actress T’Nia Miller. She’s not there to make friends, either.

Being a royal dignitary, Brother Day expects a big welcome. But Halima meets him alone and offers a cup of water. The entire Empire of the galaxy is in her hands, and she’s not messing around. Towards the end of the first season of Foundation, the Apple TV+ series adaptation of Isaac Asimov’s sci-fi classic novel, Brother Day tries to install his preferred political leader, Zephyr Gilat. But when Hailma glides in, she wins over the crowd – and we the audience – with a few insightful words.

SCENE STEALERS is a countdown that salutes the unforgettable small-screen characters of the year. Zephyr Halima is #18.

“There was a time, a millennia ago, when our souls were like wax candles,” she says. “They burnt through once and then they were snuffed out. But the mother looked down and saw this was insufficient, a single life in a single body, raised in a single world, such a soul had no foothold to climb from the trenches of ignorance.”

The reign of ruthless cloned emperors is hard to stop, but in one pivotal moment in Foundation, Zephyr Halima slows the tide.

Who is Zephyr Halima?

What Halima says in this episode may seem like sci-fi mumbo-jumbo. But the point she makes in the episode, and all throughout her appearance in the series, raises fascinating questions about the nature of souls, which are explored in an unabashedly science fictional way. If one were to believe in souls, how does that apply to clones? Are clones of other people, specifically the clones of the dynastic Cleons, soulless? If Zephyr Halima gains favor in the religion known as Luminism, then the authoritative power of the clone emperors — Brothers Dawn, Day, and Dusk — will evaporate.

But what makes T’Nia Miller’s performance in Foundation so arresting and memorable is that she’s not power-hungry for the sake of power. She actually believes in what she says, and if you listen, you’ll see she has a point. There is something indefinable about the nature of life, and if all of humanity were ruled by a clone of a long-dead Emperor, there is something inhuman about that.

In speaking to Inverse earlier this year, Miller said that when the role first came along to her, she was concerned because, on the page, Halima seemed “so nice.” ”And I don’t want to just play nice,” Miller said. But then, after Miller “got on the blower” with showrunner David Goyer, she came to the conclusion that Halima is “actually fierce and fearless.”

Foundation is not T’Nia Miller’s first dance with science fiction. T’Nia MIller had another memorable performance in the 2015 Doctor Who episode “Hell Bent,” in the role of a new incarnation of a Time Lord known as the General. While Michelle Gomez’s gender-swapped Master/Missy predated Miller’s role, we never actually saw a Time Lord regenerate into a woman on Doctor Who until T’Nia Miller.

Miller says she’s open to a return on Doctor Who, but, after Foundation, she’ll be plenty busy starring in another big sci-fi project: The Peripheral, based on the William Gibson book of the same name, produced by Jonathan Nolan and Lisa Joy (of Westworld fame). Miller relishes her sci-fi roles and says she likes all the sci-if work she can get, and doesn’t rule out a return to Foundation either.

But for now, Halima’s story is complete. At the end of Foundation’s eighth episode, “The Missing Piece,” the android servant Eto Demerzel (played by Laura Birn, another Scene Stealer) poisons Halima to preserve Day’s schemes. It’s a powerful scene that belongs to both characters, where Halimah affirms Demerzel that, despite her nature, does have a soul. Halimah genuinely forgives Demerzel, too, despite that she opposes Brother Day. Miller told Inverse that in this scene, Halima may sow the seeds to Demerzel to become even more powerful than before. “I think she leaves Demerzel empowered,” Miller says. “She relieves her of her guilt.”

From standing up to tyrannical clones to forgiving confused robots with a loving, knowing touch, T’Nia Miller’s Zephyr Halima is a science fiction character like no other. She wanted to beat the Empire but wanted to do so through honesty, compassion, and faith. By the end of the first season, it looks like Halima lost the battle, but as the Cleon dynasty starts to crumble, she may win in the end. In a series in which even eternal rest can’t stop characters, there’s a slim possibility we’ll see the brilliant and vibrant Zephyr Halima again. When asked if she’ll return to Foundation, T’Nia Miller says simply, “We’ll see, we’ll see.”

Even if she doesn’t, Halima has left her mark. Foundation will never be the same.