A Darth of Knowledge

“Have you ever heard the tragedy of Darth Plagueis the wise?” 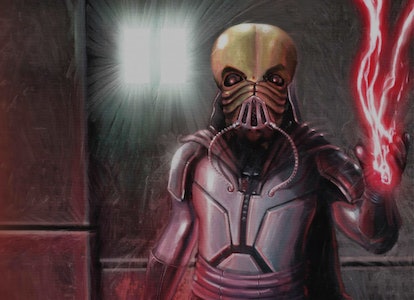 Star Wars only has a few go-to Sith. There's Palpatine and Darth Vader, of course, plus Maul, Count Dooku, and Snoke (not technically a Sith, but we'll take it). By comparison, there are dozens of recognizable Jedi in Star Wars canon.

Blame the Rule of Two if you want, but for anyone who loves rooting for the bad guys, it's a problem. However, that could change with the announcement of Leslye Headland's new Disney+ original series The Acolyte. Poised to bring a whole host of Sith to Star Wars canon, The Acolyte is set in the last days of the High Republic. Could a Sith from a non-canon novel make an appearance?

Just as Palpatine murdered Darth Plagueis, Plagueis murdered his mentor, Darth Tenebrous, as the Rule of Two dictates. Darth Tenebrous is one of the most fascinating Sith Lords in the Legends canon. As a Bith, he revered science just as much as the Force and is the source of Plagueis's — and eventually Palpatine's — obsession with eternal life and cloning.

Crucially, Tenebrous, otherwise known as Rugess Nome, was alive in the last days of the High Republic, and could easily make an appearance in The Acolyte. In fact, because Darth Plagueis isn't canon, Darth Tenebrous could even be genderswapped to serve as the protagonist in the female-led show.

Tenebrous has technically been mentioned within canon, but not in a way that limits these possibilities. The Rise of Skywalker Visual Dictionary identified a "Tenebrous Legion" among Darth Sidious's ranks. However, it doesn't provide any details about what role Tenebrous serves in the canon Star Wars timeline. It just makes the name canon.

Darth Tenebrous was first introduced into Star Wars Legends through "The Tenebrous Way," a short story in Star Wars Insider #130, which detailed his death at the hands of Darth Plagueis. Through the use of cells he called "maxi-chlorians" (yes, seriously), he was able to infect the mind of Darth Plagueis and sense his future — a future where he would be killed by Darth Sidious. This kind of scientific advancement of Force abilities is begging for a live-action adaptation.

Darth Tenebrous would be the perfect choice for The Acolyte no matter the role because his rationalist view of the Force is different to many other High Republic-era Sith philosophies. He (or she) also ties the older Star Wars eras to every other film through the connection to Palpatine. The only question is whether a canon version will be updated or if we'll get to see this Bith in all his craniopod glory.

Star Wars: The Acolyte is currently in development.