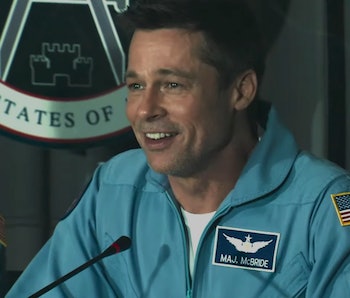 This article about the film Ad Astra was originally published on June 6, 2019 and updated on May 21, 2021 following the movie's release. Read on for the original article, with some new changes to reflect the latest updates on this topic.

Brad Pitt is the latest actor to play an astronaut tasked with a dangerous mission that will propel him into the depths of space in the film Ad Astra. Pitt stars alongside Tommy Lee Jones and Liv Tyler in director James Gray’s first major sci-fi outing that takes viewers to the far reaches of space for a nail-biting rescue mission.

Ad Astra is another entry in the recent boom of film and TV shows focused on man’s obsession with space and desire to conquer it. As the title (Latin for “to the stars”) suggests, Ad Astra has some pretty lofty ambitions. Here’s everything we know about Ad Astra, including the cast, plot, director, and production information.

When did Ad Astra release in theaters?

What is the plot of Ad Astra?

Ad Astra follows Major Roy McBride (Brad Pitt) as he goes into the far reaches of outer space in order to find his father, Clifford McBride (Tommy Lee Jones), and bring him back to Earth. A lifelong astronaut who always wanted to follow in his father’s footsteps, Roy is compelled to retrieve his father after an incident known as “The Surge” threatens life on Earth.

Clifford may be the only one with the knowledge to help save Earth thanks to his experiments with a top-secret (potentially alien) substance the resulted from “Project Lima,” an initiative to search for extraterrestrials. The biggest problem Roy faces is tracking his father down since Clifford’s been lost in space for the better part of 16 years.

Is there a trailer for Ad Astra?

The first trailer for Ad Astra was released on Wednesday, June 5, 2019. Over the course of the two-and-a-half-minute trailer, we get the first look at the world of Ad Astra, including the film’s tone, setting, and vision of space.

The mystery and drama of Ad Astra’s storyline are particularly played up as we learn more about why astronaut Roy McBride (Pitt) must going deep into space to retrieve his astronaut-scientist father, Clifford McBridge (Jones).

Who is in the cast of Ad Astra?

Ad Astra boasts a cast of heavy-hitting dramatic actors. Included in this cast is:

James Gray is the director and co-writer of Ad Astra. Gray, who also directed The Lost City of Z, has established himself as a unique voice in cinema, frequently gravitating toward dramas and period dramas. Gray has also preferred setting his films in New York City; Ad Astra is one of the rare non-NYC-set films in his body of work.

Since his feature-length debut, Little Odessa, was released in 1994, Gray’s credits include The Yards, We Own the Night, Two Lovers, The Immigrant, and The Lost City of Z.

Why does Ad Astra give off serious Interstellar Vibes?

You’d be forgiven if you watched the trailer for Ad Astra and thought, “Uh, is this just a sequel to Interstellar?” Many of the shot compositions, framing, and color palettes used in Ad Astra recall Interstellar, and that’s for good reason: Hoyte van Hoytema is the cinematographer for the former as well as the latter. Hoytema’s cinematographic work on Interstellar helped bring both vividness and realism to director Christopher Nolan’s vision of outer space. It seems Hoytema was able to deploy the knowledge gained from working with Nolan on Interstellar in order to help Gray bring his own space-set story to life.

Is Ad Astra based on or adapted from anything?

Ad Astra is a wholly original work from screenwriters Gray and Ethan Gross. Outer space has always been a source of fascination in films, so it’s not surprising that Gray and Gross looked to the stars for inspiration. The look and subject matter of Ad Astra may feel particularly familiar due to the recent surge in outer space-set films and TV shows, including the aforementioned Interstellar, Gravity, Life, The Cloverfield Paradox, The Martian, Moon, First Man, and many, many more.

How did Ad Astra do at the box office?

Ad Astra grossed $50.2 million in the United States and Canada and $85.2 million in other territories, for a worldwide total of $135.4 million. The film was initially compared to 2018’s First Man, a 2018 outer space drama. As a result, the opening weekend was more muted than expected.

What did critics have to say about Ad Astra?

Ad Astra has an 83% rating on Rotten Tomatoes, a score of 80 on Metacritic, and a B- on CinemaScore. The movie earned praise for its use of visual effects and themes and Brad Pitt's performance.