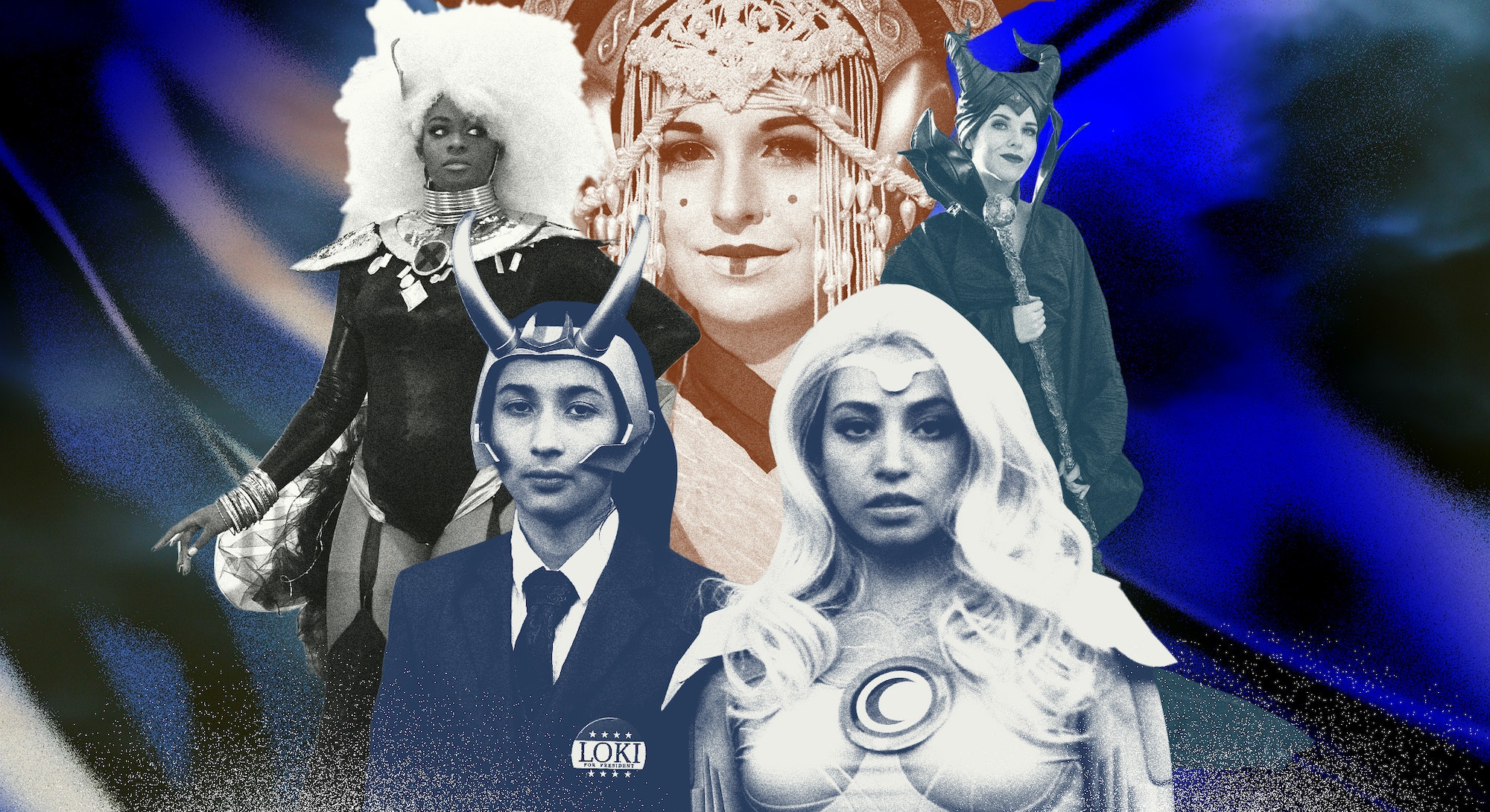 In mid-December 2015, Daniel Hassall sat outside his local movie theater for five hours, waiting to see a work of art that some have waited decades for.

Hassall was there that day to see The Force Awakens, the sequel to the sixth episode of Star Wars, The Return of the Jedi. He would later see Rogue One and The Last Jedi on their opening nights, too, he tells Inverse.

“It felt like such a communal bonding experience,” he recalls. “Like you had a unique relationship with that piece of art because you experienced it first with such a dedicated group of people. It reminds me of worship services, to be honest”

Being a fan means sharing a story, or even a worldview, with others. It means gathering people together to talk about the story. But some stories are so vital as to define entire civilizations, while others are trivial. If that’s true, then where does the Marvel Cinematic Universe fall? Or Star Wars? Are super-fans in some Disney-controlled cult? Ultimately, recognizing fandom as religion may be the best thing to happen to you.

“One way we define a religion is a way that people have a network of relationships with things that are both human and superhuman. It’s also a way that humans make homes, confront suffering, and find a way of being in the world,” Jodi-Eichler Levine, professor of Religious Studies at Lehigh University, tells Inverse. These are all themes not only of Star Wars but of countless franchises with huge fandoms supporting them.

Levine caused an uproar on Twitter earlier this year when she mused that “Disney adults” (people whose lives revolve around Disney) use pop culture to fill the same need that a “legitimate” religion might in another person’s life. But ultimately, she argues, “all fandoms have the potential to become very religious.”

Sitting outside a movie theater waiting for the doors to open on the latest installment in your fictional universe of choice, for example, may be more akin to sitting outside a shrine waiting to pray at the feet of a saint than you think.

What we call “religion” is increasingly nebulous. More than a quarter of Americans consider themselves spiritual, but not religious. The role religion used to hold in society is slowly but visibly giving way to a more secular ideology — and pop culture.

Disney adults can make trips to Disney as a “pilgrimage,” decorate their homes using the “We Do Disney” manifesto as the theme, and participate in innumerate rituals. Disney “cast members” — the firm’s name for its employees — are even required to sit through a training class called Disney Traditions.

Any fandom, be it for a sports team, a celebrity, a band, or a franchise, can functionally be someone’s religion.

“I have a very capacious definition of religion, and I think quite a lot of our contemporary fandoms would fit under that definition,” Eichler-Levine says.

But not all religiosity is benign — some groups stray toward harmful and isolating practices, sequestering their members away from broader society in the name of purity — and control. At the extreme, these sects can be called cults.

The most prominent examples of cult-like behaviors in fandom can be found in sci-fi. Especially in (Disney-owned) Marvel and Star Wars. At the same time, many real-world cults take direct influence from sci-fi and vice versa.

Heaven’s Gate, the cult that took part in a mass suicide in 1997, centered its teachings on UFOs and took lots of inspiration from Star Trek. Before he became a cult leader, L. Ron Hubbard was a prolific science fiction writer. One of his works, Battlefield Earth, was even adapted into a poorly performing film starring Scientologist John Travolta.

If you’re a fan, it’s easy to see your fandom community’s cult-like behaviors if you know where to look.

“There is an insularity there, where the in-group of established fans or followers are given a separate designation from people who casually engage with the given material,” former sci-fi superfan Daniel Hassall tells Inverse. Hassall once participated in the Marvel, DC Comics, and Star Wars fandoms.

“You have to prove your credentials, and in many ways, they make it a lifestyle. They can’t allow any criticism of their fandom or faith.”

“When a criticism is presented, the response is usually, ‘How can I show this criticism is wrong, even if it’s not,’ instead of earnestly asking, ‘is there any part of this criticism that's valid?’ That’s classic cult behavior,” he tells Inverse.

The cult of canon

For Hassall, the biggest intersection between fandom and cults lies in a sacred word within both worlds: canon. In the religious sense, canon means the official holy text or founding principles. In the fandom sense, it means the lore that is considered the official narrative.

Canon can change. In religion, it can mean nixing the Gospel of Thomas as “apocrypha.” In Star Wars, it can mean changing the Extended Universe to “Legends” when the franchise is bought by Disney. Canon is the subject of debate because its elements are so important for those who care — and controlling the canon means controlling the followers, too.

Another aspect that makes sci-fi so vulnerable to mob followings is the wealth of content to explore. There are fan theories, fan fiction, and even fan films. These have their own religious parallel. Eichler-Levine points out the Jewish concept of midrash, meaning textual interpretation of the Torah, as basically “the first fanfiction.”

“In a biblical story, if there's a break where we don't know what Abraham is thinking, or we wonder what Joseph was doing on his way to Egypt after his brother sold him, you can fill in those gaps with stories and speculation.”

Star Wars has always stood on the backs of religion. George Lucas was heavily inspired by the work of mythologist Joseph Campbell and used the Force to create an in-world religion that was universally understood. Luke Skywalker’s story is a tale about the human condition and empathy — as well as a space opera.

“In Marvel and Star Wars, there’s a real tendency towards redemption and sacrifice,” Eichler-Levine says. “Tony Stark can have this journey from being a solitary playboy to being someone who is there for the greater good. That’s a very religious kind of story.”

The text is only half the religious experience. Religions, especially ritual-heavy belief systems, bring people together as a community in terms of behavior.

The Marvel Cinematic Universe understands this fundamental truth better than any other franchise. Because the world of the MCU is so much like ours, it would have to have fans, too. Ms. Marvel introduced the concept of AvengerCon, and its protagonist Kamala Khan is a fanfiction-writing cosplay-making fan herself.

But for the real-world Marvel fan, there’s no better way to connect with the MCU than a visit to the Happiest Place on Earth. The Avengers and Star Wars-themed areas at Disneyworld and Disneyland prioritize immersion above all else.

“At Avengers Campus, Dr. Strange does a show about the mystic arts,” Eichler-Levine says. “We know it's an actor in a costume, but all religion is performance. Ritual is a kind of performance. That doesn't mean it's fake, it means that it's structured.”

Also, like mainstream religion, these rituals are steeped deeply in capitalism. For Yee Y., a Star Wars superfan who requested anonymity, that’s part of the reason people turn to fandoms in the first place. “People don't have meaning in life and have left religion as a whole due to capitalism crushing everything, so people need to resort to corporate media to fill their soul.”

Eichler-Levine adds that paying money to get something in return is not unique to fandoms. Money has fueled religions for millennia. “Some say if something's making money or requires money, it's not religion, but that's also not an easy dividing line. When we look at the history of religions, when we look at tithing, sacrifices, it’s always been there.”

Just like every group of people, there’s a fine line between a community and an unhealthy hierarchy. Poke around most big fandoms, and you’ll find some sort of “fan celebrity” who isn’t directly involved in the franchise at all but ends up cultivating a fanbase-within-a-fanbase of their own.

Even this past summer, a Star Wars lore muppet TikTokker quit the community after claims of homophobia rippled throughout the fandom. A Spider-Man fan film found itself immersed in backlash after its lead actor and star used their platforms to make racist statements.

For Eichler-Levine, this is just par for the course.

“I don't think the effects are any worse than any traditionally understood religion. There are power imbalances, there are possibilities for abuse, either financial or sexual or bullying.”

There’s no one way to be a fan, so it’s hard to answer the question of whether Star Wars fandom is basically a cult. But looking at the fan experience through a different lens may be the key to keeping your interest from veering into an unhealthy obsession. Andrew W. sees the comparison as an interesting thought experiment. “Zealotry does not lead anywhere good, and keeping that thought in mind when participating in fandom leads to much healthier media consumption,” he says.

For Daniel Hassall, it’s all about balance. “There is nothing wrong with enjoying things, and engaging with art can be an incredibly moving experience both personally and communally,” he says. “However, I think it is unhealthy to ever derive your sense of personality or sense of identity from a given brand or piece of media.”

Disney won’t be claiming tax exemption for being a church any time soon, but looking at fandom through religion is a useful way for fans to re-examine their dedication. Is it how you define yourself? Is it, to you, infallible? Are you willing to admit when it’s wrong or when you disagree, or are you worried about being shamed? Those may be signs that fandom has gone too far.

The Force is all about the balance between the light and the dark. Maybe the fan experience should be the balance of the cynical and the enthusiastic. “I think you can only truly appreciate the high points of a piece of media if you also recognize the low,” Andrew W. says.

You can live by whatever code you want. Just don’t lose yourself to a cult in the process.