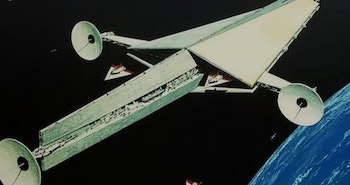 The Empire has a new giant starship. Well, technically it has an old starship making its first-ever proper onscreen appearance. In a heartstopping scene from Andor Episode 11, Luthen tangos with an Arrestor cruiser. But historically, what’s happened here is even more interesting.

Back in 1976, this ship was called a Sith Carrier and was the prototype for the iconic Star Destroyer.

Spoilers ahead for Andor Episode 11.

In Andor Episode 11, as Luthen tries to evade Imperial detection, he’s hassled by what the Fondor’s onboard computer identifies as an “Arrestor cruiser, Cantwell-class.” This large Imperial ship is tasked with pulling in ships trying to escape, with those three giant dishes on the ship used to deploy powerful tractor beams. Essentially, Luthen encounters the worst possible Imperial ship to try to slip away from.

But although the Arrestor cruiser design has been around in Star Wars canon for a long time — there was even a toy released by Hot Wheels in 2018 — this Andor episode marks its first proper appearance. Previously, this ship appeared in a holographic recruitment film in Solo: A Star Wars Story, and it also appeared in an uncompleted deleted scene. But this isn’t just some ship cut from Solo. It’s been lurking in the background since 1976.

In canon, this ship is a cruiser, but in terms of its real-world design lineage, it’s the original Star Destroyer, which was briefly dubbed a Sith Carrier. Why Sith? According to artist Colin Cantwell, he based his concept art on the “fourth copy of that script.” In early drafts, what eventually became the Empire was known as the Sith.

Working from Lucas’ script for Star Wars, Cantwell was asked to design a ship that would feature in the first scene. The length of this ship was supposed to grow “more and more absurd with each passing second.” This, of course, became the iconic opening scene of A New Hope.

In 2018, when it appeared the ship would play a prominent role in Solo, Lucasfilm named it “Cantwell-class” in honor of the artist who created it. At the time, Cantwell posted images to his Instagram account and recalled how he and Lucas discussed the size and function of the early design (note the sleek fighters that would later become TIEs).

The Inverse Analysis — Star Wars fans tend to credit all of the original trilogy’s concept art to Ralph McQuarrie. While McQuarrie’s paintings helped Lucas pitch the original Star Wars to nervous studios, other brilliant painters like Cantwell helped dream up what this faraway galaxy might look like. In a way, the appearance of this starship is perfect for Andor. The series is already about the underdogs and unsung heroes of the Rebellion, and now it’s using an unsung design.

If you squint, the battle between Luthen’s haulcraft and the Arrestor cruiser looks like one of Cantwell’s paintings come to life. If you wait long enough, anything is possible in the Star Wars galaxy.

More like this
Culture
Jan. 25, 2023
Star Wars canon just made the Jedi timeline a lot weirder
By Ryan Britt
Culture
Feb. 2, 2023
Buck Rogers in the 25th Century’s Most Baffling Change Also Gave Us Its Best Character
By Ryan Britt
Entertainment
Jan. 30, 2023
Doctor Who Could Become the New Marvel — But There's a Catch
By Ryan Britt
LEARN SOMETHING NEW EVERY DAY.
Related Tags
Share: