“They’re not even from this planet” 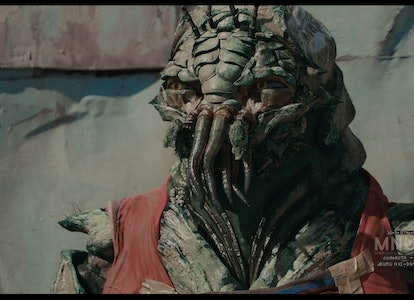 There’s no way to predict what a movie’s legacy will be. Sometimes a film will make a splash, gain Oscar buzz, start conversations, and then just... dissipate into the ether. Remember the hubbub surrounding The Artist? It didn’t exactly become an instant classic once it won Best Picture.

But one of 2009’s Best Picture contenders stands the test of time and then some. It’s just landed on HBO Max, and it’s worth your consideration.

South African filmmaker Neill Blomkamp started his career with short films, a habit he never really broke (a collection of his shorts are now streaming on Netflix). But for his debut feature, the idea had to be solid. Thus District 9 was born, adapted from his 2006 short film “Alive in Joburg.”

District 9 follows in the well-worn tracks of the alien-as-racial-allegory trope. But while most Hollywood movies — like the much-maligned Bright — approach this from a distinctly American point of view, Blomkamp provides a South African perspective.

The film is set in a world where aliens (derogatorily called “prawns”) arrive in South Africa in 1982 not as invaders or noble explorers, but as lost and haggard refugees. Put in a refugee camp that gives the movie its name, the district soon becomes a slum whose occupants are treated as second-class citizens. It is, of course, a metaphor for Apartheid, especially Cape Town’s infamous District Six, where tens of thousands of residents were forcibly removed in the 1970s to create a white-only neighborhood.

District 9 follows an alien determined to return to his planet named Christopher Johnson (Jason Cope) as he comes into contact with Wikus van de Merwe (Sharlto Copley), an employee of Multinational United, an evil, militarized bureaucracy in charge of District 9 and determined to relocate the entire camp. In investigating the fuel supply Christopher intends to escape with, Wikus accidentally sprays some in his face, which slowly transforms him into one of the aliens.

As we see Wikus transform, we watch his world betray him. His new alien DNA gives him the power to operate the aliens’ technology, which turns him into a valuable asset. Friends and family are revolted by him, while his employer sees him only as a tool to unlock powerful new tech for their weapons manufacturing division — even if that means dissecting him. Rejected by society, Wikus finds sanctuary in District 9 and the companionship of Christopher Johnson, who assures him the transformation can be reversed.

Christopher underestimates the cruelty humanity is capable of, and nothing goes according to plan. Wikus, who starts as an unsympathetic apparatchik and xenophobe, learns a hard lesson about prejudice and loyalties, and the bittersweet ending leaves the film open-ended.

District 9 captivated audiences in 2009 and earned four Oscar nominations, including Best Picture, which is incredibly rare for a genre story. Blomkamp’s star has since faded, and his debut isn’t discussed much today, but it’s a perfect gem of an alien story infused with a deeply human vice: the fear of the unknown.

The film also has an aesthetic appeal. Released in a pre-Marvel Cinematic Universe sweet spot where aliens were allowed to look weird yet emotive and relatable, the crisp CGI keeps District 9 looking like it could have come out yesterday.

Neill Blomkamp is obviously proud of District 9 and teases a possible sequel all the time. That may never happen, but you won’t regret catching up on the film that kickstarted Blomkamp’s career.