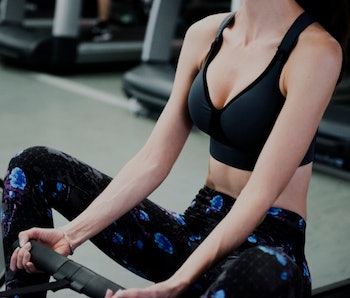 Apple Watches and light-up smart shoes have given smart wearables a decidedly unsexy reputation, but biometrics experts OmSignal are changing that with the world’s first “smart bra.”

Tucked within the bra’s band is the OM Smart Box, a sensor that tracks heart rate, breathing rate, activity intensity, steps, and calories, all in real time.

The sports bra, revealed this week at CES 2016 in Las Vegas, is — as far as digitized athletic breast restraints can be — pretty sexy. And, if you’re serious enough about working out to track real-time fitness data, pretty useful.

“I wonder how much I’m burning with this routine?”

“Am I breathing deep enough?”

OmSignal’s bra, like the men’s shirts the company released in collaboration with Ralph Lauren, is meant to take the guesswork out of workouts by picking up on data that other smart wearables — wrist-based sensors like FitBits and JawBones — can’t.

That information is sent to an app that tracks biometrics in real time, making heart rate, breathing rate, and activity intensity immediately visible to users as they work out. The app also does some light analysis of the data, estimating your recovery time and “PUSH” score, a metric measuring the amount of power and effort users put into their workout.

As with all smart clothing, the data is only ever useful if you know how to use it. But if OmSignal’s ad campaign is any indication, it’s only targeting women who take fitness data seriously — the kind of women who are motivated enough by numerical improvements to spend $150 on a sports bra.

It’s expected to go on sale later this year. We’ve gone ahead and preordered one — check back to find out whether the bra is as comfortable as it is smart, and as useful as it claims to be.

More like this
Innovation
4 hours ago
“Quantum materials” could give the human brain a run for its money, scientists say
By Nathaniel Scharping
Mind and Body
8.6.2022 1:00 PM
The 8 Best Apple Watch bands for working out
By Vanessa Spilios
Mind and Body
7.27.2022 2:00 PM
Too hot to run outside? Sports scientists share 7 tips to break a sweat safely
By Ash Willmott, Justin Roberts, Oliver Gibson and The Conversation
Related Tags
Share: