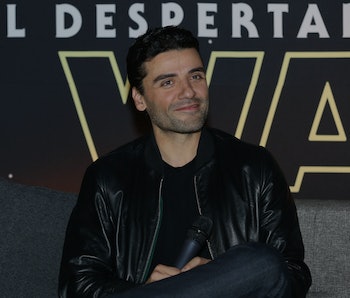 Since at least 2013’s Inside Llewyn Davis — his biggest starring role up until that point — Oscar Isaac has been very hard not to like. His offhanded, bemused caddishness in that movie makes what might otherwise be a surprisingly dark movie funny and palatable. It’s a role that could have been one-dimensional or irritating in a lesser actor’s clutches, and Isaac made it, without any force applied, realistic and moving.

The muscles he flexed in the Coens’ film translated easily into his affable wet-behind-the-ears Yonkers mayor in David Simon’s underrated HBO miniseries Show Me a Hero this year. Llewyn’s self-effacing demeanor and reactive comic timing slotted in perfectly with the perpetually in-over-his-head Nick Wasicsko. His stoic, noir-ier turn in another ‘80s NY period piece in 2014, A Most Violent Year, felt apt as well, if not too adventurous.

Luckily, it’s not just that Isaac is good at acting like a world-weary New Yorker. April’s Ex Machina juxtaposed his comic sensibilities and offhanded delivery — still distinct — with a more serious, universal villain role, although ultimately he was a pretty hapless one when faced with the full force of empowered AI. The question was: Can this guy become the next great American actor that he slowly seems to be turning into? Does he have one shtick that will wear thin?

Being a great American actor and having a shtick are certainly not mutually exclusive. But Isaac’s style has a particular, harder-to-pin-down charm. He maintains a trademark, wry sensibility without overtly recycling to an extent that verges on self-parody. It’s too subtle, and his goofiness a bit too pliable, for the great-turned-self-caricature fate to seem likely.

Isaac’s recent “new Han Solo”-y appearance in billion-dollar-baby The Force Awakens (an anticipated new entry into the Star Wars series of films) is a significant performance for him, indicating his capacity for endless adaptability, as well as fitting into a more commonplace major blockbuster role. Milking a modest amount of vanilla, functional lines into a not-fleshed-out but nonetheless immediately graspable character in just a couple of scenes is no small feat. Though we only get him in full during the film’s first act (its best part), the warmth of his performance is the initial invigorating force in the film, and hangs over the rest of its duration. One comes out of Force Awakens, among other things, looking forward to how Isaac’s role will be expanded in the coming SW films.

I hope his career goes the way of a Cary Grant, and he’s shown the first signs of this trajectory: an actor with an inimitable style — down the road, we’ll be able to do impressions of him — who can bring a similar, nuanced sensibility to both dramatic and comedic roles. He’s not fully alpha, not fully neurotic beta, not fully working along the lines of status quo of leading men, but also not pushing too much in the opposite direction. He feels invested, knows when to make fun of himself. He’s got enough of “sex symbol” in him. And he’s setting himself up to never have a way to be typecast. He’s the most promising rising actor in the industry today — a figure just unlikely enough to root for, just smart enough to have the capacity to be one of the biggest actors in the business.

For now, we only have a role alongside Christian Bale in the more modest Terry George vehicle The Promise, a turn in an X-Men movie that will definitely be terrible, and Rian Johnson’s Episode VIII to look forward to in the next year. There won’t be huge surprises here, but if his recent roles demonstrate anything, it’s that he’s got decades of great things ahead of him. Maybe we’ll even get to hear that boy sing again soon.

More like this
Innovation
8.11.2022 11:00 AM
“Quantum materials” could give the human brain a run for its money, scientists say
By Nathaniel Scharping
Entertainment
8.8.2022 3:17 PM
Westworld Season 4 is finally fixing the show’s original sin
By Ryan Britt
Innovation
8.5.2022 11:00 AM
Alexa could diagnose Alzheimer’s and other brain conditions — should it?
By Joanna Thompson
Related Tags
Share: