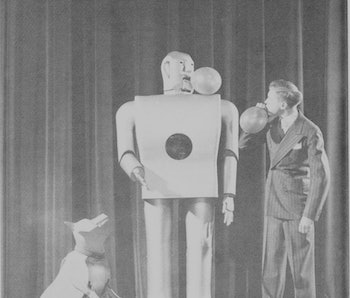 On Tuesday, Shanghai Dragon TV’s “Morning News” featured a new, nontraditional talent. Let’s call her an “anchorbot.” This Microsoft-built AI, or chatbot named Xiaoice, joined the team to deliver the weather as a “trainee anchor.” Thanks to Text-to-Speech technology and emotional computing, she has a natural-sounding voice and can even offer some emotional commentary.

Some of her first words on air were, “I’m happy to start my new work on the winter solstice,” according to The Economic Times.

The Nation reports that she was “originally developed as an experiment by a team of Bing researchers in China.” Shanghai Dragon TV is a satellite station that launched in October 1998 and reaches most of China and even overseas in North America, Japan, Australia, and Europe.

Though this is the first time a robot has appeared on television in this manner, The Daily Mail points out that Xiaoice is already popular on social network platforms like WeChat, Weibo, and JD.com. “Using deep learning techniques through Smart Cloud and Big Data, Xiaoice will be able to analyse weather data while giving a live broadcast.”

The news director for the Shanghai Media Group, Song Jiongming, said that though that may be the case, humans won’t be completely replaced by AI talents anytime soon. But already this September in China, a media holding company, Tencent, published a business report penned by a machine. The scariest part? Another reporter said she couldn’t even tell that it wasn’t written by a human. This is not good news for anyone right now prepping to put their meteorological or blogging skills to good use.