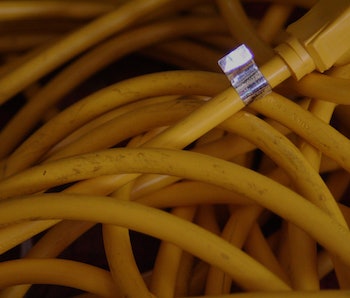 Sometimes non-events are more indicative than actual events. For instance, this week, Disney stock hasn’t done much — even as Star Wars: The Force Awakens has crushed box office records on its way to planetary dominance. The House of Mouse is missing the chance to celebrate for the same reason that Dish Network Corp. and Comcast are having a light Christmas: So-called “cord cutting” is on the rise. But that term is reductive and misleading, a flippant attempt to explain away a ceremony of eye-gouging that has the media flinching and the public sitting in the dark.

Time Warner Cable and Comcast are about to raise their fees. The reason for this is that no one wants to pay their current fees. But the move isn’t paradoxical. Broadcasters need the extra money to pay for the rights to things like NFL games and live musical events — programming that differentiates television from Netflix and streaming sites. This happens pretty much every year and there is always subscriber attrition, but most viewers will go along with it. The system is — by definition — not sustainable. Yet no replacement system is in place.

Though the broader media narrative is that people are leaving TV for Netflix, that’s not totally true. According to a Pew Research Study released earlier this week, 9 percent of Americans have never had cable or satellite subscriptions, 24 percent of Americans currently do not subscribe to cable or satellite TV, and cable saturation is not necessarily tied to broadband subscriptions in poor and young households.

There remains a significant, if economically marginalized, population that rocks home phones and TV, skewing the numbers, but the monthly bill younger generations seem absolutely set on paying is for their smartphones. People aren’t cutting cords and heading to broadband — adoption hasn’t trended up — people are cutting cords by going smartphone-only.

This phenomenon, which is not happening on a massive scale yet, points to broader economic issues as well as issues within the media. TVs are not work devices and spending is down on pure entertainment devices. The smartphone-only trend isn’t an early adopter thing; it’s a poor people who don’t have jobs on computers thing. In essence, the trend is for consumers to cut all cords that don’t plug into devices used for work. Smartphones are the work devices lumberjacks and programmers have in common.

This is a worrying trend for companies like Time Warner because investments in spectacle (think: Game of Thrones, which runs on Time Warner-owned HBO) may not pay off on the small screen. In a sense, there’s a vicious cycle within the vicious cycle: The quality programming the higher fees pay for does create the sense of an event so people go to the house of the person they know with a television. This notion won’t exactly blow the minds of young, urban Americans: High production value television doesn’t make people want to subscribe to cable.

That said, good shows definitely don’t make people want to unsubscribe either. And, for now, inertia may be the thing that cable companies have going for them. TV watchers at rest tend to stay at rest.

Well, that’s only half true. TV watchers at rest tend to play with their cell phones.

More like this
Culture
8.9.2022 10:00 AM
The Sandman: 11 characters pulled from DC comics history
By Robin Bea
Culture
8.15.2022 10:30 AM
Will the Corinthian return in Sandman Season 2? Comics reveal the answer
By Mónica Marie Zorrilla
Culture
8.11.2022 11:30 AM
You need to watch the scariest exorcism movie on Netflix before it leaves next week
By Eric Francisco
Related Tags
Share: