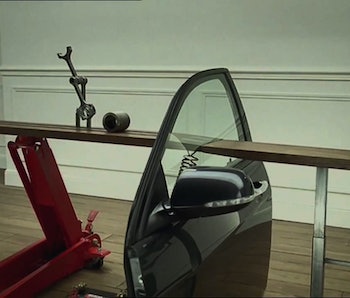 You may remember a 2003 Honda commercial. Doesn’t sound believable, but it’s true — and the thing didn’t even run on television. It was one of those videos that managed, before YouTube debuted, to go viral.

The commercial, named “The Cog,” was directed by Antoine Bardou-Jacquet, who’d already been directing ads and music videos for the better part of a decade. The physical playfulness on display — objects interacting with one another in space — is present in a lot of his work.

Check out how he abstracts objects and people in this music video for Alex Gopher’s “The Child.”

After years of commercial auteurship, Bardou-Jacquet is finally moving on to feature films. On paper, this sounds great. One of the continuous problems of the CGI era is that action sequences don’t feel real — characters and objects feel weightless and movement feels irrelevant. Bardou-Jacquet’s work is demonstrably the opposite of that. “The Cog,” after all, is about nothing else.

So there’s reason to be excited about his move into feature films. His first film, Moonwalkers, has an appealing premise as well: It’s a drugged-out comedy about the U.S. Government trying to get Stanley Kubrick to film a fake moon landing in case the Apollo mission goes bad, only to get taken in by con men pretending to be Kubrick. The problem is, well, watch the trailer:

For a comedy, it doesn’t seem exceptionally funny. And while there’s some vibrant shot framing, not much here demonstrates Bardou-Jacquet’s previously-expressed physical creativity. (Reviews from festivals have not been kind either.) Is it still worth getting excited about Antoine Bardou-Jacquet trying to make feature films? Probably — the history of Hollywood is littered with directors with unimpressive debuts. Given his potential, it’s still worth keeping an eye on Bardou-Jacquet’s career moving forward.

So, yeah, we’re keeping our hopes up. He may not be a great filmmaker yet, but that doesn’t mean he won’t be. Hollywood needs this kind of dynamic weirdness, stat.