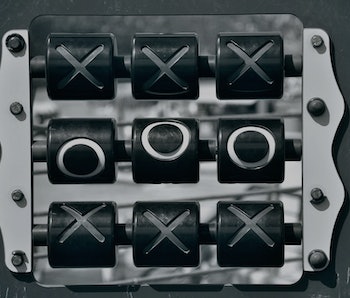 Tic-tac-toe doesn’t have much of a rep. Sure, it’s a simple, brief distraction from the monotony of existence, but once your 8-year-old self realizes that you can always force a draw, it loses its appeal. The problem with tic-tac-toe is the lack of strategic depth: there’s only one viable strategy, and that strategy is simple enough to be memorized and applied with almost no effort. So tic-tac-toe falls into the sad category of solved games. Challenging someone to recite the alphabet backwards would be more unpredictable.

Many other games with oft-lamented design flaws have it worse. Monopoly — the grande dame of reviled games — leaves all meaningful strategy at the door and consigns its players to a five-hour demonstration of the evils of unbridled real estate markets. Picking on Candyland, Sorry!, and their ilk seems cheap. They’ve endured enough abuse already.

Yet even with its ignominy at the bottom of the Board Game Geek rankings, tic-tac- toe can be redeemed with three simple hacks that turn it from a trivial exercise to a much deeper, and more enjoyable, game. Note that this new version is still a solved game, but the winning strategy is more complicated than in vanilla tic-tac -toe, and therefore more difficult to memorize and deploy. And, crucially, your next opponent won’t yet have practiced the strategies needed to win.

Numberphile has a video up in which mathematician Thane Plambeck discusses this variant on tic-tac-toe, in its single-board and three-board versions. Plambeck wrote a paper on the game that you can find on the arXiv.

The first twist in this new version of tic-tac-toe (available in the Apple Store as Notakto) is that both players play as X. Normally, of course, one player plays as X and the other as O, and they compete to make three in a row. If both players play as X and none of the other rules change, the game still sucks. Instead of a draw, the first player can always force a win.

To fix that, we adopt another rule change known as misère play, in which the way to win is to lose. This still doesn’t make the game that much more interesting. Your third and final twist will fix that: play on multiple boards at the same time. If three Xs appear in a row, that board is dead. Play continues until there is only one board left. Whoever makes three in a row on the final board loses the game.

Even these tweaks on a game as simple as tic-tac-toe should have you off and running. But watch Plambeck show his work below, to get the full effect. “This game is difficult to master,” he says. About time, tic-tac-toe.

More like this
Innovation
8.9.2022 11:00 AM
This self-healing material could fix your dinged-up car in 30 minutes
By Molly Glick
Innovation
8.1.2022 5:01 PM
The 10 best iPhone wallet cases
By Masha Vapnitchnaia
Innovation
8.8.2022 10:00 AM
A wild new plane-train hybrid could whoosh you to your destination — if it can get off the ground
By Molly Glick
Related Tags
Share: