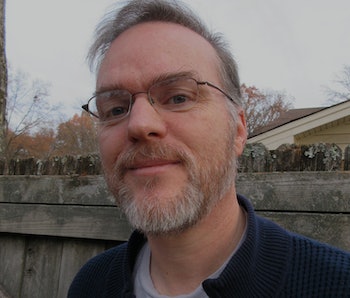 Remember when you were a kid and you told your mom that, for your job, you just wanted to watch TV? That’s sorta how things go for Noel Murray, of The A.V. Club, Rolling Stone, and elsewhere. When I ask him where work ends and life begins, he says, “I don’t want to get too pretentious about it, but I do consider it all work. Partly that’s because I’ve been doing this weekly column for Rolling Stone where I write about five things on TV in a given week that are most important or the best. As a result, I have no idea when I’m watching television if it’ll end up in the column somewhere down the road.” This is the blessing and the curse of this dream career path, it turns out. When your job is watching TV, all your TV watching can become work.

So, what kind of TV does Murray favor? “I’m inclined to watch a lot of different kinds of television,” he tells me from his home in Arkansas, which doubles as his office. “I have pretty ecumenical tastes.” He watches reality shows, sitcoms, cable dramas, procedurals — a self-described “broad diet.” “When it comes to reality, I watch everything with my wife,” Murray says. “We tend to stick with the competition shows. We grew up with game shows and, to us, they’re pretty much the new form of the game show.” He cites standards like The Amazing Race, Survivor, and Top Chef, as well as more “offbeat” fare like Cutthroat Kitchen. “One of the reason we like these shows is because we can watch them with our children,” Murray adds.

“I don’t know if it’s pride or embarrassment,” Murray says when I ask him if he can quantify his television intake. “Is there a proper measurement for a shit-ton?” Most nights, the tube is on from dinner time until bedtime: about 5 p.m. till midnight. He doesn’t watch much TV during the day, except when he makes his lunch and dials up old episodes of Quincy, M.E. and The Rockford Files.

During the day, he writes, watches movies, and listens to music. I ask him what his favorite flicks of the year have been. “I do draw a line between what I expect the various academies to do and what I really like,” Murray says. He dug Brooklyn and 45 Years, and believes they’ll do well during awards season. Looking at his top 15 list, he says, “I don’t expect Mad Max: Fury Road to be a Best Picture nominee, but damn it it should be.” (Inverse begs to differ.) Murray lists off The Duke of Burgundy, James White, and Mustang as other films he loved that might not do so well with Academy voters. “It was a really good year for movies I don’t think are going to get a lot of attention,” he quips.

Does he keep up with music? “Not so much anymore,” Murray says, before getting all insightful on me. “I used to be really diligent. One reason I kind of stopped writing about music is I found the things that I liked most were ignored or dismissed by mainstream rock critics. I kind of got tired of being an outlier. It’s all very politicized. When it comes to music — more than any other entertainment medium — I find that, when it comes to deciding what’s the best of it, there’s a lot of pressure to make sure your list properly diverse — both in genre and in race and gender. Which is all an initiative I support, and I appreciate people pushing me to listen to something I wouldn’t otherwise listen to. But, at the same time, I like what I like. I got tired of putting out things that I like and hearing back stuff like, ‘Gosh, what a sausage fest!’” He adds that of the music “other people liked” this year, he was into Kendrick Lamar and Courtney Barnett’s records.

Once he’s exhausted Twitter or his RSS feeds, Murray will pull up a book — on his phone. “I basically spent the past year-plus reading the entire A Song of Ice and Fire,” he says. He’s also been reading some short detective novels and “Hitmen, a quasi-expose of the payola scandal of the music industry in the ‘70s.” It all comes back to TV for Murray, saying that the book might “help inform my understanding of the show Vinyl coming out next year.”

I ask him what his Arkansas media consumption is like and he tells me that the Arkansas Democrat-Gazette is still a solid piece of print. “One of our favorite things to do,” Murray says, “When we — my wife and kids and I — go out to lunch together, we’ll all just grab a section of the paper and read it. Nothing really beats that.” And if that doesn’t warm your media heart, I don’t know what will.