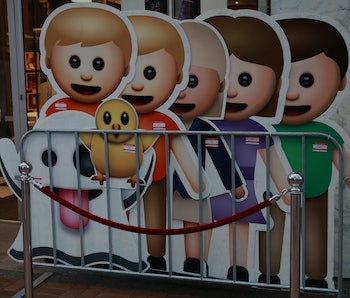 Earlier this month, Twitter removed its longstanding “favorite” button (a star) and replaced it with a “like” button (a heart). Now, it appears that the platform is testing out the ability to react to tweets with an emoji.

Adding emoji reactions, however, would not improve the Twitter experience. Reacting on Twitter, as it stands now, is straightforward: You “like” something and move on; you retweet it because you want other people to know you really like it; or you just ignore tweets altogether. Reaction possibilities would just muddy up something that doesn’t need much fixing. Twitter is unique, but it still wants to be what everyone else is.

For example, such a feature already exists in Slack, the very popular intraoffice communication tool (and occasional psychotherapist). As Twitter seems to be introducing imminently, Slack allows users to react to messages with hundreds of emojis, with the ability to create your own, too. It wouldn’t even be the first time Twitter seemingly copied Slack either, as the removal of direct messaging character limits seemed a little reactionary.

Adding emoji reactions to Slack is fun, given that the platform is used primarily for work. It’s a break from the onslaught of assignments and secretly complaining to your coworkers about how those guys in marketing always take the worst shits upstairs. Twitter, however, is already a free-for-all. You can literally say anything, so long as it fits under 140 characters. You can just tweet an emoji as your response, if you want, as the Los Angeles Clippers did so prolifically this summer. And if that’s too complicated for you, just tweet a photo of an emoji.

Even Twitter executives used their platform as it’s intended to respond to a journalist’s query about the new feature. They didn’t react with 🙊. They just tweeted 🙊.

Twitter should be the simplest social media platform to use. There’s a character limit, so diatribes are infrequent. You can add media (photos, videos, GIFs, etc.), but that just counts as part of the character limit. It’s meant to be minimal yet rapid. It should not be complicated.

More like this
Innovation
2 hours ago
47 popular home upgrades people are making that are under $35 on Amazon
By Christina X. Wood
Innovation
6 hours ago
60 years ago, an iconoclast designer revealed a fix for our biggest tech problem
By Tim Gorichanaz and The Conversation
Innovation
8.13.2022 9:00 PM
Want to buy an EV? Here’s what you need to know about the Inflation Reduction Act
By James Morton Turner and The Conversation
Related Tags
Share: