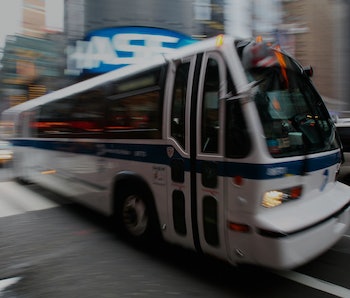 Sick of sitting behind the wheel in rush hour traffic all the time? Well, there’s no better time to start taking the bus or riding the train, according to a new study just presented at the American Heart Association’s Scientific Sessions on November 8.

The study charted the health and commuting habits of 5,908 adults in Osaka, Japan. The different types of transportation taken by participants included driving cars, taking the bus or train, and walking or cycling to work.

Researchers at the Moriguchi City Health Examination Center checked in on participants’ likelihood of obesity, diabetes, and blood pressure in relation to what kind of transportation they used to get to work each day. The average age of the participants was between 49 and 54 years old.

We’ll assume not having to deal with road rage and traffic jams all the time might be one reason fewer bus/train commuters had high blood pressure. Plus, the necessity of walking to their bus or train stops adds to the amount of daily exercise these commuters get. However, it should be noted that the driving group was comprised mostly of men, whereas women were more likely to use public transportation, walk, or cycle to work.

But what’s really surprising is that the folks taking public transportation were also healthier than the people in the study that walked or biked to work.

Why’s that? The study’s lead author and the director of the Moriguchi’s health center Hisako Tsuji notes: “If it takes longer than 20 minutes one-way to commute by walking or cycling, many people seem to take public transportation or a car in urban areas of Japan.” This makes sense — especially in an environment that tends to get chilly, snowy winters. Additionally, the walking and cycling group may not have been traveling as far to get to work as the public transport group walked to get to their respective bus or train stops.

So what does this mean for American commuters?

According to the most recent U.S. Census Bureau’s American Community Survey results, most American commuters took cars to work with 76.4 percent driving alone and another 9.4 percent carpooling. Only 5.2 percent of people took public transport and there were even fewer walkers (2.8 percent) and cyclists (0.6 percent).

That means almost 86 percent of Americans surveyed were driving to work, which means there’s a huge chunk of the population that may be at higher risk for obesity, diabetes, and high blood pressure… all of which may be even more exaggerated in the U.S. than Japan as Tsuji threw shade noted: “Physical activity may be more effective at reducing diabetes among [the Japanese] population than it is among a Western population.” (Ouch.)

However, it appears that Americans are slowly accepting public transportation as a viable, easy, and cost-effective way to get to where they’re going. According to the American Public Transportation Association, there were a record 10.7 billion trips taken on American public transportation in 2013, which is the highest ridership of public transport in nearly six decades. With more train systems being built, bus routes being streamlined, and an emphasis being put on conserving resources, it looks like commuting via public transportation (and potentially boosting our health levels) is becoming easier each year.

Regardless, we’re looking for our bus passes right about now…

More like this
Science
8.5.2022 6:00 PM
How is nature connected to well-being? It's complicated, scientists say
By Tara Yarlagadda
Science
8.5.2022 1:00 PM
The most miraculous sci-fi movie on Netflix reveals a scientific debate over aging
By Tara Yarlagadda
Science
8.3.2022 3:44 PM
Ground-breaking technology restores dead organs back to a life-like state
By Miriam Fauzia
Related Tags
Share: