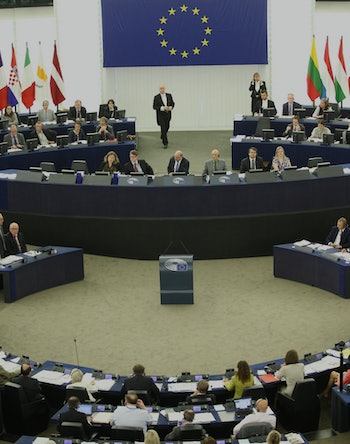 Consumer rights advocates are on a last-minute blitz to convince lawmakers to amend a controversial net neutrality proposal on the eve of a vote that could decide how 503 million people living in European Union countries experience the Internet.

On Tuesday, the European Parliament will vote on proposed legislation that prevents Internet Service Providers from charging sites for faster connections, but it includes a few key exceptions that would allow for faster internet speeds for specific uses, such as wifi connected to driverless cars, which need up-to-date information in the interest of safety. Advocates say business interests could squeeze through those same loopholes and create a tilted marketplace that favors companies with the most money or influence, regardless of message or quality of content.

Without amendments, the rules could favor sites by designating them specialized services, or by regulating that speculative impending network congestion, says Jeremy Malcolm senior global policy analyst with the Electronic Frontier Foundation, a nonprofit concerned with civil liberties in the digital age.

“One of the biggest concerns is that the regulation as it stands will allow ISP and telecom companies to discriminate against a certain type of traffic,” Malcolm tells Inverse. “This is really dangerous because it sets up a hierarchy of traffic from most important to least important. And there’s bound to be some mistakes, even if they’re trying to do it in a user-focused way.

“Encrypted traffic is particularly a problem because the ISP doesn’t know what it is — is it email? Is it video? — so what we could find is encrypted traffic slows down as a whole which is the opposite of what we want it to do, especially these days with surveillance and malicious hackers and cyber criminals.”

Another troubling provision that allows for unfair treatment is a provision for the practice of zero-rating, where certain services and applications aren’t counted against a consumer’s monthly data allowance.

Stanford law professor and Director of the Stanford Center for Internet and Society Barbara van Schewick expressed similar concerns about the current draft, criticizing loopholes that would allow ISPs to play favorites with companies that pay for specialized services and speed up or slow down traffic at whim.

“Contrary to some claims, the proposal is weaker than network neutrality rules in the United States. European citizens deserve the same free and open Internet that Americans can enjoy,” she wrote in a lengthy post at Medium.

It’s also swimming against the tide as tech companies push for greater user protection, with Apple CEO Tim Cook giving impassioned speeches about the need for encryption and Google’s August 2014 announcement that it would boost the rankings of sites using HTTPS to shield user privacy and security.

Tuesday’s vote is the end result of almost two years of negotiations among European Union members. While Malcolm says some politicians have met with consumer advocates and agreed that the legislation needs work, fear that any proposed changes will derail the final vote might keep more from coming forward. A majority of 376 of the 751 European Parliament members will have to agree for the measure to pass.

“I think we still have an uphill battle,” Malcolm says. “If it passes without any amendments, it’ll be better than nothing. That will be a step forward. But then it’ll come down to the implementation of the law which is where the problems will come in. It’s not the end of the world, but it makes the job much more difficult.”

That puts the EFF and sympathetic groups on a long, difficult road of parsing the law as the internet grows under a system where existing laws have a decades-plus wait for review.

“It’s important to do this right, because when Europe writes a regulation it’s often in place for 20 years before it gets a second look,” Malcolm says. “And so many things become outdated in that time. We want to take our time and get it right and not rush this, because it’s already seen as being compromised.”