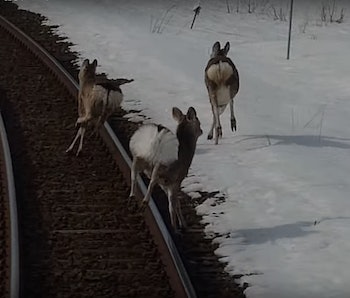 Deer on train tracks in Japan are in equal parts an adorable spectacle and a spectacular annoyance. The Hokkaido Railway Co. only had five days without a deer-related incident in 2013. The animals caused 2,600 delays, and twice that number of deer are killed annually. The deer are so common that tour guides take tourists on the train to get a closer look.

The trains vs. deer contest has led to a novel innovation. According to RocketNews24, a Japanese company is selling iron-enhanced salt licks to keep the animals away from trains.

Because it’s the iron, apparently, that keeps the deer coming to the tracks. Like Popeye, they’re just interested in a healthy, well-balance diet.

Whether or not the salt licks work has yet to be determined. Other efforts to deter the deer have proved fruitless. Outfitting trains on the northern island of Hokkaido with ultrasonic sirens meant to tick off the deer had “zero effect,” according to The Asahi Shimbun. Even scattering lion excrement on the tracks only kept the animals off for a time — they figured out the trick pretty quickly.

They will also save railway companies a great deal of headache, and commuters some time and hassle. The losses to society in terms of adorableness, tourism, and social media capital have not yet been calculated.