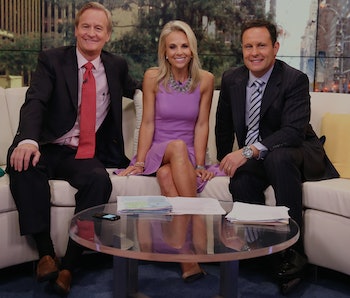 We all know Fox News is gonna be Fox News.

Following the first Democratic debate, the team at Fox and Friends took to the air to decry all the “freebies” being promised by the candidates. (This is the abridged political dichotomy of the Fox worldview, you see: Billionaires work hard for their money, while the people who work for billionaires, making them rich, are slackers.) A sneering Brian Kilmeade read from a checklist of all the handouts and comps Hillary, Bernie, and Co. promised Big Daddy Government would provide: “Childhood education, higher minimum wage, public college, public family leave, health care, health care for children, and in-state tuition for illegals, which they were cheering for!”

Oh, those greedy little crumb-snatchers. Who do they think they are, vacuuming up American tax dollars? Not as if Timmy worked for his vaccinations. You don’t want polio? Get a job, ya mooch!

What in the Ron-Swanson-wet-dream-hell are we even doing here? Children are tiny, vulnerable people whose chief distinction as members of your household, let alone your society, is that they don’t work for a living. A kid’s job is to learn, grow, and develop into a hopefully well-rounded, functioning human being, not worry about how medical bills are getting covered.

Thankfully, for all the political polarization in this country, only 8 percent of kids in the United States are uninsured. I’d argue that number is still too high; there is no reason every rugrat in the richest country in the whole of human civilization shouldn’t be covered. And kids and their families damn sure shouldn’t become pariahs just because a poor, uninsured child needs to go see a doctor.

Some of you may counter with “Well, obviously its poor kids’ parents not the kids themselves who are the problem, right?”

Not really. More than 16 million children in the United States, a bit more than 20 percent, live in poverty. A lot of those children have parents who do in fact work full-time, hence the term “working” poor (about 10.6 million families under the poverty line have at least one adult working 40-plus hours a week). Are there some parents that take advantage of the system? Sure. Adults can be pretty terrible people. Some adults don’t work as hard as they could to support their families. Some adults also collapse the world’s economy for short-term profit. Some adults convince their fellow adults to go fight wars for an entire fucking generation. Never really know what a grown-up is gonna do.

None of that has anything to do with the fact that we should be taking care of sick kids. No parent wakes up in the morning and thinks “Hot damn! Can’t wait for little Johnny to catch the cancer so I can gorge myself on all these gubbament freebies!” And no reasonable, self-respecting human being should ever imply that’s the case.

While I would hope that the moral aspect of not wanting kids, yours or anyone else’s, to be sick, injured, or dead would be enough, there are more practical, utilitarian reasons why healthcare for kids is a great investment for everybody.

Kids with regular access to medical care — meaning routine checkups, not just dumping them in emergency rooms when the problem becomes unmanageable — typically grow up to become healthy adults. Preventative health care for children is often the difference between a curable malady and a long-term disability or premature death. It’s the starting point to learning the healthy lifestyle behaviors that will help keep them fit for the rest of their days.

I understand an $18 trillion debt is scary to a lot of folks, but kids didn’t build that. Throwing children under the bus, calling their need for healthcare a “gravy train,” and implying that they or their families are somehow parasitic losers all to score cheap political points is low. Also, it’s just plain ol’ backwards from an economic standpoint; if you are concerned about the long-term future of this country, having a thriving, healthy workforce should be high on your list of priorities. The freeloading child you take care of today will pay you back.

There is nothing wrong with being passionate about politics. Hell, I’d argue that more people should get politically active, not less. But when we start vilifying children for … being children, we’re best served taking a break and reexamining our priorities.

More like this
Mind and Body
8.4.2022 3:01 PM
Genetically engineered gut bacteria boost long-term metabolic health — mouse study
By Allison Parshall
Mind and Body
8.7.2022 10:00 AM
Nordic Diet vs. Mediterranean Diet: The health benefits of eating like a Viking, explained
By Duane Mellor, Ekavi Georgousopoulou and The Conversation
Culture
8.6.2022 11:38 AM
60 gifts under $25 on Amazon that'll go over well no matter what
By Christina X. Wood and Cassandra Seale
Related Tags
Share: