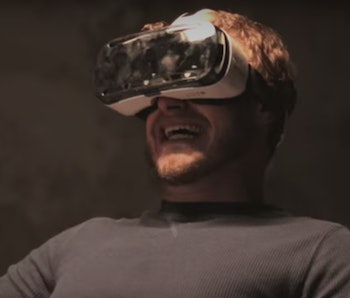 With a popular “amateur” section stocked with user uploads, how would the site separate the life-ruining from the life-affirming videos? Could any measures really be effective when even a momentary exposure puts you in front of the site’s massive audience? What’s going on virtual reality erotica? What happened with the company’s idea for sex in space?

Corey Price, vice president of the company, answered those questions and more in an interview with Inverse.

We have a well-trained team that takes care of each inbound request.

What guidelines will they use to determine if a request is legitimate?

To avoid an increase in false positives, we can’t disclose the exact series of steps that we follow, but each individual in charge of policing this content has been sensitized in order to be able to determine the valid takedown requests from the invalid ones.

What’s the site’s traffic these days?

We definitely have plans to integrate VR into the site, with rollout likely beginning on our Premium platform. We’ll be looking to support the Oculus Rift first and foremost (with others potentially on the horizon). The Oculus makes the most sense to develop for at the moment given its brand recognition, so that’s why it’s our initial choice. But it’ll work the same way most videos and/or games work on VR — you feel as if you’re really there in front of the actors. The device’s gyroscope, magnetometer, accelerometers, and 360-degree field of view will all play into the porn experience ideally. And now, with several third party sex toy peripherals (i.e. the TwerkingButt), people can enhance their experience ten-fold.

Looking to the future, you put your Twerking Butt product on the market in August. How are the early sales?

The response to the Twerking Butt has been amazing. Sales are going very well.

The crowdfunding campaign was intended to gauge interest, primarily. It seems like the world isn’t ready for sex in space yet, but we very well may revisit this in the years to come. As technology continues to evolve, so too will our resourcefulness to continue to push the boundaries of sexual exploration.

We have a few things up our sleeves. Stay tuned.

Interview questions and answers have been edited for clarity and brevity by ‘Inverse’.

More like this
Gaming
8.3.2022 6:00 PM
We Met In Virtual Reality offers a hopeful but flawed vision of the metaverse
By Willa Rowe
Mind and Body
8 hours ago
Does chewing gum burn calories? The answer may be hard to swallow
By Allison Parshall
Mind and Body
8.15.2022 1:00 PM
This lifestyle “hack” claims to alleviate anxiety. But does it actually work?
By Katie MacBride
Related Tags
Share: