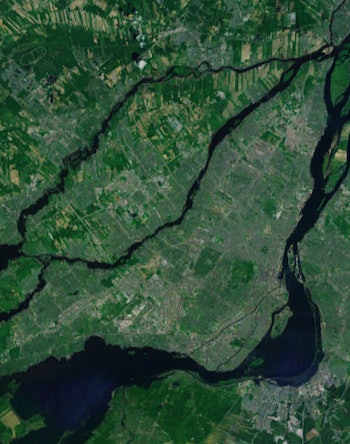 Montreal could make a strong claim to being the urban agriculture capital of the world. The city of 1.6 million has over 79 community gardens that serve tens of thousands of residents. That’s a small fraction, sure, but it’s huge compared to the numbers being thrown up by the competition.

The obvious weirdness here is that Montreal has a relatively short growing season — it runs from May to the end of September. But Vikram Bhatt, an architecture professor at McGill University, believes that the cold actually bolsters the cultivation trend.

“Perhaps because [the season] is so short, people engage in it very actively,” Bhatt tells Inverse. “During the warm periods, the weather is good, and things grow very well.”

It isn’t simply a new trend or fad that the hipsters have made cool for the moment. Bhatt, who has worked extensively on urban agriculture projects for nearly three decades, traces Montreal’s urban farming movement to the ‘70s and the Oil Crisis. At that time, the independence-minded Quebecois began thinking about ecologically-sound processes for local food production. This borderline obsession culminated in the election of Pierre Bourque, a horticultural engineer and former director of the Montreal Botanical Gardens, as Montreal’s mayor in 1994. Bourque, an eccentric and occasional sovereigntist, made a big push towards turning Montreal into a gold-standard for green practices.

These days, the city has a permanent committee that convenes specifically to discuss urban agricultural issues and help make recommendations for what the city can do to improve urban farming practices for the populace.

“There are many alliances between different groups who want to come together in the name of urban agriculture,” says Bhatt, ranging as wide as schools and student-run organizations, to businesses big and small that are looking to take part in some kind of civic service.

One of the big reasons for how popular urban agriculture has gotten has to do with how much freedom and choice it gives people. Even in just a 100 square-foot plot, urban farmers — from amateur to expert — have the ability to grow whatever kinds of foods they want, based on their own cultural or dietary preferences. If you’re into specialty peppers not sold in stores, you can grow them yourself. Want to avoid produce exposed to artificial preservatives? Plant your own assortment of fruits and vegetables on your rooftop.

“You can see how different the gardens are,” says Bhatt. “That’s one great thing about urban agriculture — you can grow what you want. This is especially useful for the big influx of immigrants coming in from around the world.”

But there is also practical value to urban agriculture. As cities like Montreal grow — current estimates suggest the greater metropolitan area will have a population of over five million by 2030 — there will be incredible strains on making sure residents have enough to eat. Urban agriculture also reduces heat island effects: Vertical gardens and green rooftops could help keep buildings cool. And larger gardens can help to reduce runoff during a storm. And, of course, neglected city spaces and unused lots aren’t good for neighborhoods or the people who live in them.

“There’s a limit to how much municipal systems can do to make cities greener,” says Bhatt. “Urban agriculture is a way for the citizens to take on the initiative.”

Even some industrialized techniques are making their way into these projects and transforming these gardens into cutting-edge ventures. A prime example is the most successful urban farm in Montreal: Lufa Farms, the world’s first commercial rooftop urban farm. Its gardens and greenhouse farms produce more than 220 tons of produce a year — while putting a big emphasis on water conservation, sustainability, and organic pest control methods.

Another big project called Urban Barns shifts industrial food production indoors, by keeping plants on conveyor belts and growing them in a hydroponic environment under LED lights. The facility is a big hit among Montreal hotels and restaurants for their lettuce, kale, and other micro-greens.

Overall, Bhatt thinks of urban agriculture as part of the larger re-imagination of the cities that can help urban dwellers and adapt to rapidly changing conditions. He thinks of urban farming as a core part of the character of Montreal, but expects bigger things to happen as the city continues to grow.

“I hope city officials can come up with new, more creative ways to establish and grow urban gardens,” he says. “We’re starting to see people do some stranger things like keep rooftop beehives and make honey. Other kinds of insects or animals like chickens or livestock could change the whole nature of the city. That would be a very special new layer to Montreal.”