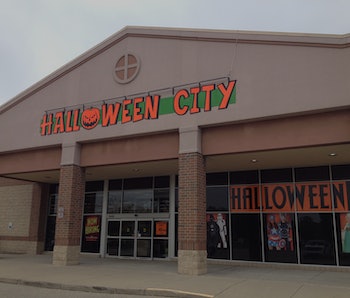 George is an assistant manager at Spirit Halloween, a 12,000-square-foot warehouse sporting wall-to-wall Halloween costumes, masks, and props at one of Spirit’s locations in Nebraska. That location is open for about three months, from Labor Day to November 1st, “long enough for me to make enough money to survive until Christmas,” he says. “Then I work two weeks around the holidays doing all sorts of stuff: boxing gift packages, delivering newspapers.”

George, who says he’s single and has no children, is a good representation of the itinerant, blue-ish collar, down-for-whatever slice of the modern American economic pie, the “folks” (to borrow an Obamanism) making ends meet by working in the 21st-century version of the Steinbeckian seasonal grind. It turns out this time of year at Halloween superstores — like the 4th of July at fireworks tents, or Christmas at big-box retailers — you find a lot of people who, come next month, will have to find something else to make ends meet.

George found Spirit Halloween — or Spirit Halloween unearthed George — through a temp agency. “They called me around Memorial Day,” he remembers, though most of his store’s employees applied through Spirit Halloween’s website. “Most of my jobs count as seasonal,” George tells me, meaning he doesn’t qualify for benefits, “unemployment, healthcare, none of that.” He gets health insurance through Nebraska’s insurance exchange, and took “the whole dollar amount” off of his monthly subsidies. “You can fudge the dates of employment now and then and squeeze out an extra dollar or two from the government,” he admits.

Asked what the number one costume is at his location this year, he replies, without missing a beat, whether I mean for pets, kids, or adults. “I don’t know if it’s the most popular [for dogs],” he says, “but my favorite, the one I laughed at when I saw it, was the one for Cecil the Lion. You know, that lion that got shot in India (sic)?”

What does that costume entail? “Oh, a mane, and some fake blood …”

Spirit Halloween is a national chain owned by Spencer Gifts, LLC. (You know, that Spencer’s.) The store has a strict policy as far as returns go: “We don’t do returns after the 18th [of October],” George says. “It’s final sale. But people get it. Who returns a Halloween costume?”

That’s also the case at Halloween City, the Coca-Cola to Spirit Halloween’s Pepsi. Annually the chain sprouts, mushroom-like, to colonize more than 100 locations nationwide, including one in Fayetteville Pavilion in Fayetteville, Georgia (and they aren’t taking back your Hillary Clinton mask after you bought it, either). Down in Fayetteville, the number one costume “is anything Star Wars,” says employee Doug.

But what about people who don’t want to wear the mask? “Then it’s either Han Solo or the new bad guy with the funny lightsaber, you know, the weird one.”

What costume in particular? “Uhm, stormtroopers? That’s a reliable one. People saw stormtroopers in the trailer for the new movie, so they know it’ll be around for a while.”

In a strip mall featuring a Target, Home Depot, and a Sports Authority, Fayetteville’s Halloween City is the temporal odd store out. “We’re gone November 1st,” Doug says. “That’s how they have it set up.”

What happens to the building? “Until we open back up next year, I’m pretty sure it just sits there.” Like a jack-o’-lantern on a lazy dad’s porch.

Doug was a retired junior high teacher who “used to love Halloween. It’s fall, the best time of year.” Halloween City is “a place to work a few days a week. And I still get a kick out of the costumes.”

Asked what he’ll be dressing up as for Halloween, Doug groans. “Sorry to say, I have no Halloween plans. Isn’t that terrible? I guess I should get something.” How about a zombie from The Walking Dead? “Too scary,” he says. At least he gets an employee discount — 30 percent or so. In other words, if you have free time, check out the jobs Spirit has available. That’ll cover all the fake severed limbs you’d ever need, one-third off.

More like this
Innovation
8.15.2022 1:33 AM
47 popular home upgrades people are making that are under $35 on Amazon
By Christina X. Wood
Culture
8.6.2022 11:38 AM
60 gifts under $25 on Amazon that'll go over well no matter what
By Christina X. Wood and Cassandra Seale
Entertainment
8.11.2022 1:00 PM
Our Flag Means Death fans are redefining historical fiction
By Dais Johnston
Related Tags
Share: