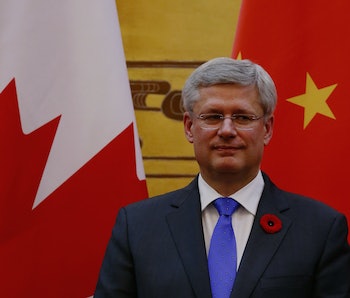 Canada will hold a federal election on Oct. 19, and if the polls are right, it might just tear the country apart. The majority left-leaning nation of 35 million people has been led since 2006 by Prime Minister Stephen Harper, of the Conservative Party. In very loose terms, he is Canada’s answer to George W. Bush, a center-right pol from an oil-rich province accused of being hostile to science and to dissent at large. Because Canada has a multi-party system with a unified right-leaning party, Harper has won two terms as prime minister with Conservatives getting 36 percent of the national vote in 2006 and 38 percent in 2011.

Most of the other 60-plus percent of the Canadian electorate would just as soon see him get bounced. But they’re splitting their votes between other national parties: the center-left Liberal Party (think: Hillary Clinton), the further-left New Democratic Party (think: Bernie Sanders), and small but dedicated Green Party.

Canada right now is like “America with one Republican Party and three Democratic parties,” University of Toronto political science professor Christopher Cochrane tells me. “And it just doesn’t work.”

With national polls showing another likely slim plurality win for the Conservatives, the Canadian left is down to the dicey practice of crossing party lines, and maybe swapping votes. NDP partisans in strongly Liberal areas might agree to trade a vote to Liberals in areas likely to produce an NDP win, or they can eye polls and try to back whomever is running in front. It’s a utopian, data-driven attempt to elbow Conservatives out of Parliament, idealism as interpreted by Machiavelli.

To help, Hisham Abdel-Rahman, an IT programmer and consultant by trade, and a political activist by disposition, has established and organized the site strategicvoting.ca. On it, left-leaning voters can research whether they live in a riding (Canada’s version of a Congressional district) with a split-left vote. Then, they scheme.

In other words, though this riding’s voters are 60 percent left-leaning, the Conservatives narrowly won the seat.

Abdel-Rahman believes NDP supporters in a place like Labrador would prefer the Liberal candidate — the party that came closer in the 2011 election and is polling better than the NDP candidate, according to current data — to another Conservative victory. If they want to be represented by a non-Conservative, and do their part to prevent a Conservative-controlled government, then, their best tactic is to put aside party loyalty and vote Liberal.

“Strategicvoting.ca is a grassroots effort dedicated to assisting progressive voters make a difference instead of voting just to make a statement,” Abdel-Rahman tells me in an email. “The goal is to elect as many progressive members of Parliament as possible in federal elections.”

Vote-trading will always be democracy’s answer to liar’s poker — how will you know, really, that the partisan you traded your vote to will hold up his end of the deal? — but it seems like a natural combination of social media and any first-past-the-post election where a third party polls well. Imagine the dealmaking on Facebook in 2016 if one of the myriad Republican candidates (Donald Trump, perhaps) split off to run independently. The right might organize to avoid the so-called Nader effect, named for America’s 2000 presidential election, in which the independent candidacy of Ralph Nader was blamed for siphoning votes from Al Gore. Eight years of George W. Bush presidency followed.

“We saw strategic voting work this year in the Alberta provincial election,” Abdel-Rahman says. There, after 40 years of Conservative victories, the NDP triumphed. Voters there used websites like ChangeAlberta.ca to coordinate votes based on closely contested areas. “I am not trying to register vote-swapping,” Abdel-Rahman writes. “I am trying to achieve the best results in each riding while not hurting the weak parties. In ridings where strategic voting could not change the outcome and the Conservative party is sure to win, I am recommending that all progressives vote Green to [maintain] the Green Party’s total share of the vote.”

The idea has gotten traction among the nail-biting Canadian left. Data scientist Ali Kashani writes on Medium that the battle is concentrated in just 16 ridings where strategic voting could topple Harper. And musician Dan Mangan shared this chart on his Facebook page, projecting election results if NDP and Liberal voters tried to pick non-Conservative winners rather than vote their party lines.

In a perfect world, then, the left would unite and see more proportional representation in Parliament. But this ain’t a perfect world, and it’s likely that if Conservatives eke out another close win, Cochrane says, the left is going to have to coalesce, as parties on the Canadian right did in the early ‘00s. “Strategic Voting won’t be enough for the Liberals, and the NDP, and to an extent the Greens, to overcome what the Conservatives confronted early in the 21st century,” Cochrane says, “which is that they should have cooperated before the election, and that they need to think seriously about uniting.”

The problems are just too numerous with strategic voting, he says: “The level of information and sophistication that one would have to have in order to cast a vote strategically is higher than your average voter is capable of.” Polling errors and small sample sizes cloud the data. And people just don’t like it. Aligning against a party is just unsatisfying, maybe even undemocratic, if you’re voting for another party you also disagree with.

Cochrane predicts a Conservative victory will set off “three stages of grief” for the Canadian left.

“The second stage,” he says, “will be blaming Conservatives for winning by deploying tactics that some would find objectionable. The third will be an introspection, finding what it is the left needs to do to win, which in my mind would be to form some kind of cooperative arrangement, whether it’s to unite, or to arrange running candidates like a coalition government.”

Could it happen in the States? It would take an independent candidacy, which is unlikely but hardly unprecedented. But, further, America is, in professor Cochrane’s words, more “bipolar” on party identification. The most viable third option here has been to stay home on Election Day. Still, for the experiment happening in the next week, Canada’s strategic voting will be worth watching.

More like this
Innovation
8.11.2022 11:00 AM
“Quantum materials” could give the human brain a run for its money, scientists say
By Nathaniel Scharping
Innovation
13 hours ago
Scientists at CERN have discovered too many particles for physics to keep up
By Harry Cliff, Tim Gershon and The Conversation
Innovation
9 hours ago
Mars City: 3 Red Planet resources could forge a critical building material
By CAROLYN COLLINS PETERSEN and Universe Today
Related Tags
Share: