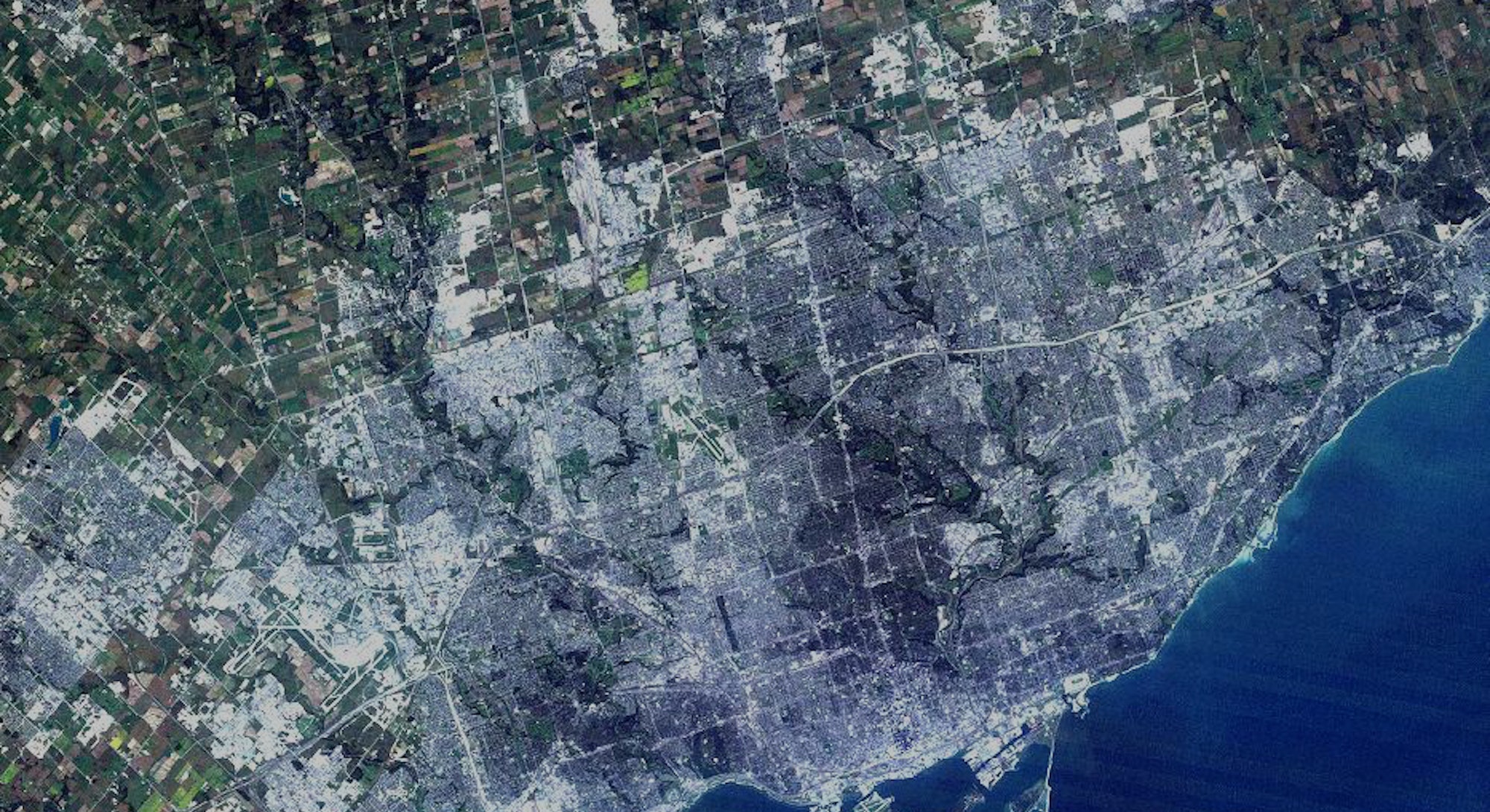 Toronto, the fourth-largest city in North America and home to over 2.6 million Canadians, is expected to grow by almost 36 percent by the year 2030. Many urban planning and design scholars are already voicing concerns that Toronto is on its way to becoming “Manhattanized” with smaller housing units, constant development, and more glass high-rises. But what of the community gardens and the pedestrians?

Not all of Torontans are ready to see “The 6” transformed. Canadian cities have historically been greener than their American counterparts. The Toronto Atmospheric Fund already mapped a practical method for reducing the city’s carbon footprint by 80 percent in 2050 and eventually turning the whole greater metropolitan area carbon neutral. Canadians won’t be keen on giving up park space for new construction — in fact, they are likely to build more as urbanization ramps up.

Urban designers like Daniel Calero Jimenez of the University of Toronto argue that there’s another way. His concept, “The Exostructure,” was based off the idea of “symbiotic cities” that coexist peacefully with nature while also evolving with increased needs from a growing city. Jimenez’s design was an effort to bring Toronto one step closer to being a net-zero energy community. Inverse spoke with Jimenez and learned more about the Exostructure and how it would fit in a future Toronto that’s been intensely transformed.

Can you define what “symbiotic city” means to you? What kinds of problems do you think you can solve with that framework?

To me, a symbiotic city is all about getting rid of the idea of waste. It’s a closed loop system where energy and matter can be continuously cycled through different man made and natural systems. In essence, we are trying to replicate what happens in nature. If a tree dies, it decomposes and becomes an input to another natural system — there is no such thing as waste in nature. Also, in a symbiotic relationship, all parties must mutually benefit each other. This mutualism is a key component to the idea of a symbiotic city.

Many engineers, architects, and planners will now agree that by mimicking the symbiosis that’s seen everywhere in nature, we can begin to remodel and improve the way our cities deal with waste and consumption. For example, to function organically with the environment, cities would need to greatly minimize their inputs and outputs, otherwise known as “urban metabolism.” The clearest way of achieving this would be by reducing, re-using, and recycling — yes, the 3 Rs can save the world! Thus, symbiotic cities would have innovative solutions to greatly reduce the consumption of water, energy, food and materials, re-using these inputs as many times as possible, and than recycling or repurposing them for use in other systems.

My concept of the Exostructure would be just one of many possible solutions that would be needed to make a symbiotic city possible.

To what extent right does Toronto live up to the idea of a symbiotic city?

I can’t say that I have the street cred to give you the best answer on this one, but in my opinion, Toronto is at its infancy stage in terms of moving towards a symbiotic city. However, during a recent discussion with a friend and mentor of mine, University of Toronto professor Kim Pressnail, he mentioned that there are now many “islands of hope” arising in Toronto. This is what he calls some of the great initiatives and legislation that have been recently put in place to move the construction industry in the right direction.

A great example of this would be the Toronto Green Standard, which is creating stricter performance requirements and guidelines for new buildings in Toronto. With the help of these initiatives, there seems to be some momentum that is beginning to build towards constructing greener buildings and retrofitting the old inefficient ones. That being said, many of the glass condo towers that are popping up everywhere are still extremely inefficient from an energy consumption perspective, and will only get worse as they get older. At the end of the day, we all know that it’s all about money — if the economics don’t line up, most builders just won’t take the extra step in the right direction. I have faith that we’ll get there very soon though.

The other major issue that almost every Torontonian will agree on is the traffic congestion. It constantly plagues the city and results in millions of dollars lost in inefficiencies. It’s a very complex issue that the city is dumping loads of cash to solve. In my opinion, Toronto can’t become a symbiotic city until it finds alternative modes of transportation that can fully replace non-automated vehicular traffic, especially in its high-density areas. This means completely rethinking the way we plan and build our cities.

Can you tell me more about the Exostructure? How does it work as a solution to the problems you’ve outlined?

The Exostructure performs two main functions. Primarily it acts like a ‘smart’ double façade that can enclose buildings in optimal microclimates, thus reducing heating/cooling energy demand. It achieves this through the use of electro-chromatic glazed glass (dynamic glass), thermal chimneys, and heat exchangers. These systems can work synergistically to optimize the internal microclimate surrounding the enclosed buildings by receiving constant feedback on internal and external climate conditions.

You can think of it like a high-tech, low-energy greenhouse that can be built around buildings to keep them in optimal temperatures. In the future, this could be a viable retrofit option for the many inefficient buildings, including all those glass towers we’re currently building that will require millions to retrofit once they begin to leak. Now, considering that a huge portion of energy in Toronto goes to heating our buildings, the reduction in energy consumption that the Exostructure creates can be significant.

Secondly, the structure itself can be built to support future above ground expansion projects. This is where the concept of ‘urban evolution’ comes in to play. Over time, above ground buildings, parks, and infrastructure (like walkways and bikeways) can anchor or be completely built onto these Exostructures. This creates an above ground structural support network that allows cities to continue to expand vertically without the need of demolishing and rebuilding. By doing so, you are saving energy that would otherwise be used in the construction of new buildings, as well as providing alternative transportation infrastructure that can assist with the traffic congestion issues.

How did you design the concept of the Exostructure? What kinds of aesthetic and practical considerations were going through you mind?

The Exostructure idea came out of some research work that I was participating in following my first year in cvil engineering at the University of Toronto. We were retrofitting an old Victorian home (now called the Gemini house) using an unconventional method called ‘Nested Thermal Envelope Design’ (NTED™).

The general concept of the Exostructure was born when I began to think about applying similar concepts to much larger buildings in Toronto. From there, I tried to focus on some of the city’s largest issues and how I could address them with my concept. The original goal was to help reduce energy demand in buildings by reducing the need to heat or cool them. What I then realized was that we could also future proof these structures by turning them into vertical infrastructure that constantly evolve with the needs of the city. It wasn’t meant to be a solution that would be implemented today but more of a creative leap towards what the future may hold. Thus, I limited my scope to practical considerations related to the engineering aspects of the design, and the design’s impacts on energy use, planning, transportation, and the environment.

That being said, the biggest issues towards implementation today would be mostly related to socio-economic and political factors, all the technology in the design exists today and we could very well build it if we wanted to. However, the concept needs to be developed more in regards to the technical details, political/economic feasibility and the wider social impacts. I’m hoping that in the least, the concept can get some people thinking about the future of our cities.

What are some specific ways in which you imagine the Exostructure would exist and work in the Toronto?

When I imagine the Exostructure in Toronto, I picture a timeline of possibilities. In the near future, they may look very much like a double façade with the main purpose of reducing energy consumption in some of Toronto’s most energy hungry buildings.

As time progresses, their true potential comes out. I can envision several buildings or even entire city blocks encapsulated by these structures, with new levels of parks, food gardens, and buildings, being built on top. Everything you would need would be available within the Exostructure. They would all be interconnected through a web of pedestrian bridges, walkways, bikeways, and roadways with automated transportation. The future applications are numerous and quite exciting.

How has new technology in engineering, architecture, and urban design made it easier to create ideas like the Exostructure? What kind of technologies do we have now that make it feasible to create something like this that we didn’t already have 10 years ago? How would emerging technology of the future shape the way you would go about designing the Exostructure?

Once again, this is something I recently chatted about with Pressnail, who’s been involved with the building industry for much longer than I’ve been in school. He mentioned that ‘smart’ technologies have become the big game changer in our buildings. Smart technology provides feedback that can be used by systems within a building to optimize energy efficiency.

This is really at the heart of what makes the Exostructure different from conventional double facades. For example, electro-chromatic glazed glass is able to control the amount of sunlight that enters a building by tinting itself when a building wants to remain cool. It’s systems like these as well as the thermal chimneys and heat exchangers that make the Exostructure ‘smart’ — it can control its internal climate based on external conditions. Most of these technologies have been around for longer than 10 years — the difference now is that they have become commercially viable options and can be networked together to work synergistically. Without technologies like these, which can talk with each other, it’s very difficult to envision how ideas like the Exostructure could significantly reduce energy demand in buildings.

In regards to the structural component of the Exostructure, there are many relevant developments in structural engineering that are a result of current research efforts in resilient infrastructure. Resiliency is a very important idea that is teaching us how to build our cities to withstand climate change. We are now beginning to understand how to construct buildings and infrastructure that can withstand flooding, hurricanes, earthquakes, and whatever else nature decides to throw at us. We will need to apply the new materials and building techniques that come out of research like this in order to build Exostructures that can support above ground infrastructure.

The future is very exciting, especially when I begin to think about all the possibilities for the Exostructure. I can imagine future adaptations of the Exostructure occurring through advances in regenerative building fabrics, which can clean our air, urban food production through vertical farms, and material recycling through modular prefab buildings or even 3D printing. Advances in building materials will also completely change the way we design and construct Exostructures, especially if we figure out how to build with carbon nanotubes. The possibilities really are endless, especially when you begin to free up the real estate in the sky.