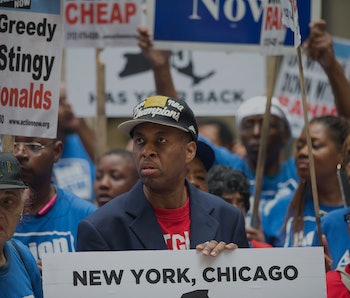 The demographics giveth, the demographics taketh away. Thus is the lesson in an influential paper by Morgan Stanley economists making the rounds and arguing that just as the flood of baby boomers into the workforce in the ‘70s started to move bargaining power into the hands of employers and push real wages down, so too will an aging population and a drop in birthrate swing the pendulum back toward high wages.

The paper, by Morgan Stanley economists Charles Goodhart, Manoj Pradhan and Pratyancha Pardeshi, says we could be on the edge of a global turnaround in wage equality. As The Economist notes, Goodhart argues that there will be a boom in the demand for labour to replace the positions abandoned by the aging population. Those same people not too old for labor, and suffering all the health problems attendant to their age, are going to require a hell of a lot more medical professionals and caregivers than we have on hand now. This should drive up demand for labor, moving real wages higher and chipping away at inequality.

The projection isn’t bulletproof. Boomers might stay in the workforce as long as possible, either because they didn’t plan properly for retirement or they’re still recovering losses in their savings from the 2011 crash or even because they’re just bored not working. More women could bolster the workforce, and immigration could affect the tide, though that second variable shouldn’t have too much of an impact. The biggest challenge might be, as The Guardian’s Paul Mason writes, just changing employer’s mindsets. Over the past 30 years, and the last decade especially, they’ve grown accustomed to a flexible market where anyone can be hired or fired and workers have little bargaining power. And temporary work, or part-time work where employees are handed just a few hours a week is just a fact of doing business if you’re stuck in low-paying jobs. Labor still needs to stand up if it’s going to take these potential gains, but at least they’ll have a footing to do so.