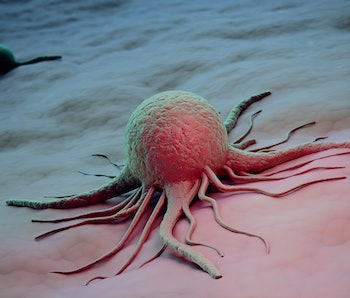 It’s important to detect breast cancer as early as possible to begin treatment before it can spread, and it appears artificial intelligence might be able to help. A team of researchers has developed an A.I. system that can diagnose breast cancer from an X-ray image better than a radiologist. This new research was recently published in the journal Nature.

“Despite the existence of screening programs worldwide, the interpretation of mammograms is affected by high rates of false positives and false negatives,” the study reads. “Here we present an artificial intelligence (AI) system that is capable of surpassing human experts in breast cancer prediction.”

This kind of A.I. could help address shortages in radiologists and could become another tool to help doctors reduce the number of times someone is misdiagnosed. Around 20 percent of mammograms produce a false negative.

The researchers write that this study will help pave the way for clinical trials. It also provides further evidence that A.I. could be helpful for detecting a whole range of different types of cancer.

As Inverse reported in May of last year, Google has also been developing A.I. that can help spot lung cancer. Lily Peng, from the Google A.I. healthcare team, said at the time that lung cancer is unfortunately not caught early 80 percent of the time, which means more people die from it than otherwise would. This kind of technology could help reduce that number significantly.

Peng said this A.I. could help increase the survival rate of lung cancer patients by 40 percent. When it was used on an early CT scan of someone who was later diagnosed with lung cancer, the A.I. was able to detect that the person had cancer when five out of six doctors could not.

Things don’t always work as perfectly in the real world as they do in the lab, but studies like this one suggest A.I. could change the way we screen for cancer and help countless individuals get a proper diagnosis. We’re looking forward to seeing how this A.I. performs in clinical trials.

Screening mammography aims to identify breast cancer at earlier stages of the disease, when treatment can be more successful1. Despite the existence of screening programmes worldwide, the interpretation of mammograms is affected by high rates of false positives and false negatives2. Here we present an artificial intelligence (AI) system that is capable of surpassing human experts in breast cancer prediction. To assess its performance in the clinical setting, we curated a large representative dataset from the UK and a large enriched dataset from the USA. We show an absolute reduction of 5.7% and 1.2% (USA and UK) in false positives and 9.4% and 2.7% in false negatives. We provide evidence of the ability of the system to generalize from the UK to the USA. In an independent study of six radiologists, the AI system outperformed all of the human readers: the area under the receiver operating characteristic curve (AUC-ROC) for the AI system was greater than the AUC-ROC for the average radiologist by an absolute margin of 11.5%. We ran a simulation in which the AI system participated in the double-reading process that is used in the UK, and found that the AI system maintained non-inferior performance and reduced the workload of the second reader by 88%. This robust assessment of the AI system paves the way for clinical trials to improve the accuracy and efficiency of breast cancer screening.

More like this
Innovation
November 23, 2022
Machine learning could translate thoughts to speech in near real-time
By Abe Musselman
Innovation
November 30, 2022
Farts say more about your health than you think — now, scientists are listening
By Max G. Levy
Science
November 30, 2022
An overlooked public health issue could contribute to stillbirths, research says
By Tara Yarlagadda
Related Tags
Share: