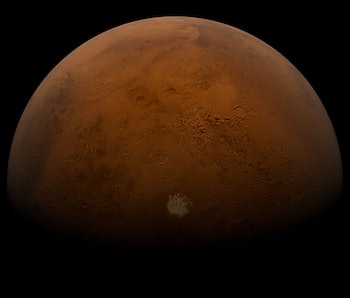 It’s hard to imagine that the cold, dusty, and desolate planet Mars once looked very different. Some 4 billion years ago, a thick atmosphere is thought to have protected its surface from damaging radiation, enabling water to flow on its surface — it may have even hosted life.

Today, things are very different. The Red Planet’s atmosphere is 100 times thinner than that of Earth’s and is made up of 95 percent carbon dioxide. It might sound harsh, but the Martian climate may actually be far more stable than Earth’s, according to new data.

What happened to Mars’ atmosphere is a mystery that has puzzled planetary scientists for years. Now, a new map charting the winds that blow across the planet’s surface could reveal clues to how and when Mars lost its atmosphere.

Using data collected by NASA’s Mars Atmosphere and Volatile Evolution spacecraft, scientists have created the first map to to measure the global circulation of Mars’ upper atmosphere. The map provides an unprecedented comparison to the atmosphere of Earth — and may lead scientists to change current models of Mars’ climate.

The map is detailed in a study, published in the journal Science this week.

Launched in November 2013, MAVEN orbits around Mars and studies its atmosphere. In June 2015, the science mission was extended for an additional two years.

Mapping Mars’ winds wasn’t on the original agenda for the MAVEN mission. Mehdi Benna, planetary scientist at NASA’s Goddard Space Flight Center, and lead author of the study, had the idea to operate the spacecraft’s platform differently in order to gather the necessary data.

“We floated the idea that should we operate the platform differently, we might be able to do something different,” Benna tells Inverse.

The hardware team behind the spacecraft examined the possibility, and decided it was feasible in the spring of 2016. The measurements used in the map were collected over the next two years.

“The cool thing was that the mission was never designed to do so,” Benna says.

During its orbit around Mars, the MAVEN spacecraft dove into the upper atmosphere at altitudes of around 140-200 kilometers above the planet’s surface to measure the wind speeds.

The data reveal an interesting contrast to Earth’s atmosphere. The global circulation flow of wind on Mars is much simpler than the one on Earth, and is relatively stable throughout the Martian year and its seasons, according to the study.

That’s because the things that make Earth’s atmosphere more complex and contribute to its variations — such as its oceans and continents — are missing on the Red Planet, Benna says.

The team noticed that the winds respond to the topography of the Red Planet. Mars has an impressive terrain that rivals that of Earth’s. It boasts the tallest mountain in the Solar System, Olympus Mons, which stands at 16 miles — or nearly 26 kilometers — high. Mars’ Valles Marineris canyon system is around four times deeper than the Grand Canyon, while the Hellas Planitia impact basin is the largest crater on Mars with a 1,400-mile diameter.

“It’s actually quite surprising,” Benna says. “As we’re flying above the ground, the winds are shifting in response to mountains below.”

How Mars’ terrain shapes patterns in the wind

The study reveals that the signature of the planet’s topography is able to reach high altitudes due to gravity waves on the planet, which are generated in low altitudes and ripple their way through the different features of Mars’ terrain. These waves reach up to hundreds of kilometers, disrupting the wind patterns of the planet’s upper atmosphere.

Benna compares it to blowing bubbles at the bottom of an aquarium, watching them float their way to the top till they reach the surface, and then upset a small boat floating on the water.

Although MAVEN is not an imaging mission and the spacecraft doesn’t have any cameras onboard, the patterns enable scientists to visualize the topography of Mars. “We sense the presence of the mountains by these gravity waves that basically map the topography,” Benna says. “We can see the surface, but we see it in a different way.”

Measuring the wind may not directly reveal how Mars lost its atmosphere, but the information is crucial for models that may be able to answer that question.

“Now that we have this data, that allows us to tweak our models,” Benna says. “We can make a much more accurate prediction.”

Creating a better model of Mars’ ancient climate will also help scientists determine whether or not life once existed on the planet — back when it had a thicker atmosphere and potential surface water.

“To understand the possibility of a more habitable planet, you have to understand how Mars lost its atmosphere,” Benna says. “It’s all related to its climate in the past.”