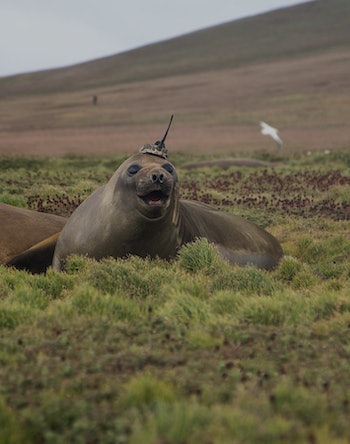 NASA recruits a diverse array of scientists to study our planet and our universe. But one female research assistant, based in Pasadena, California, has a rather unusual resume and bio.

Confused? If she could understand human language, she might have questions, too. Whether she realized it or not, a southern elephant seal recently helped scientists collect crucial data on the transfer of heat through ocean currents, and how that might change the climate models we rely on today.

The seal is just one example of the many animal sidekicks that researchers rely on to gather crucial data about our world. Some, like the seal, provide insights into how our oceans change as the climate changes. Others collect and feed back data on land. All of them are giving humans a far richer picture of the way the climate influences the Earth.

A tagged elephant seal basks on Kerguelen Island, a French territory in the Antarctic. Elephant seals are tagged with sensors and antennas — are glued to the seals’ heads — when the animals come ashore either to breed or to molt. The researchers remove the tags to retrieve their data when the seals return to land. If they miss a tag, it drops off with the dead skin in the next molting season.

To recruit the seal, Lia Siegelman, a visiting scientist at NASA’s Jet Propulsion Laboratory in Pasadena, California, outfitted the seal with a sensor and a pair of antennas (it also works as an avant-garde headpiece). For three months, the seal swam through the turbulent waters of the Antarctic’s circumpolar current. She covered more than 3,000 miles, all while diving up to 1,000 meters deep some 80 times every day.

This agile swimmer provided scientists with an unprecedented view of the currents. This is uncharted territory for us humans — we can’t venture into the same waters the seal can, let alone casually dive around the place.

The study, published this week in the journal Nature Geoscience, sadly does not list the seal as a co-author. But it does describe how heat moves from the interior of the ocean back up to the surface through swirling vortices of water. The findings go against past work which suggested the opposite — that heat is transported from the ocean surface down to its depths.

“I hope this [result] will encourage physicists and biologists to use those very rich data from seals,” Siegelman said in a statement.

This 3D schematic shows how a tagged elephant seal collects data by swimming long distances and diving to great depths through turbulent waters near Antarctica. Satellite data are used to identify characteristics of the waters through which the seals swim. The blue represents cold, dense water; the red areas are less dense and typically warmer.

Seals are not the only creature scientists have turned to in the past. Many other animals have played their part in science, even the tiniest of them.

At the University of Washington, researchers recruited bees to help their cause. To do this, they created small — obviously fashionable — backpacks for the bees. The backpacks may be tiny, but they are laden with sensors that can gather and relay data on the health of crops and temperatures on farms.

The packs have a rechargeable battery that lasts up to seven hours, which the humans wirelessly recharge while the worker bees are resting at their hives.

Bees aren’t the only ones carrying backpacks for science. Alex Jahn, a researcher at Indiana University, kits out the birds he studies with backpacks that contain GPS trackers.

These tiny accessories weigh just two grams. But despite their size, they offer invaluable insight into bird migration patterns.

Of course, the sloth Mr. Bojangles has been making backpacks fashionable for years. The baby sloth, who lives at the Costa Rica Sloth Sanctuary, is quite the celebrity among furry researchers, helping scientists understand sloth behavior and ecology.

The elephant seal isn’t the only marine creature to be recruited to the greater good of field research, either.

To gain insights from other, more slippery creatures, marine biologists created the ITAG, a sort of Fitbit tracker for squid and jellyfish.

These trackers measure how the squid and jellyfish’s biology changes as temperatures rise in their ocean habitats. Let’s hope the cephalopods stay on top of their fitness goals.