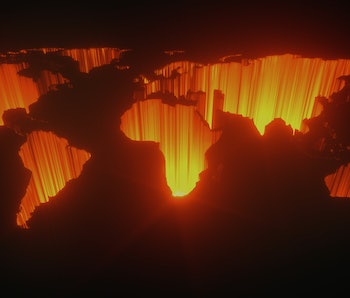 In August 2019, a variety of nonprofits, journalists, and others claimed Brazilian President Jair Bolsonaro was behind the fires that started in the Amazon rainforest. Bolsonaro had, after all, campaigned on opening up the Amazon to logging so the country could expand its farmland. Around that time, Harvard international relations professor Stephen Walt wrote an article for Foreign Policy, arguing that there will come a time when countries invade other countries over how they’re harming the environment.

“How far would the international community be willing to go in order to prevent, halt, or reverse actions that might cause immense and irreparable harm to the environment on which all humans depend?” Walt writes. “It might seem far-fetched to imagine states threatening military action to prevent this today, but it becomes more likely if worst-case estimates of our climate future turn out to be correct.”

To deal with the effects of climate change, there will have to be a unified effort among the world’s most powerful countries to come up with solutions and implement them. We saw an attempt at this when 196 countries signed onto the Paris Agreement in 2015. Under the Trump administration, the U.S. has carelessly withdrawn from the agreement. According to climate experts, there must be a much stronger version of this agreement to adequately deal with climate change.

Robert Keohane, a professor of international affairs at Princeton University, tells Inverse that the Paris Agreement is a “good framework” but doesn’t go far enough.

Essentially, Keohane believes an agreement that could stop climate change in its tracks would have a “pledge and review” process where countries set a goal for reducing emissions, an authority checks on their progress along the way and higher goals are set once the previous goals have been met. It’s not a simple process, but it could work.

Joshua Busby, an associate professor of public affairs at the University of Texas, Austin, tells Inverse that the U.S. and China will have to take the lead when it comes to fighting climate change. These countries produce a lot of greenhouse gas emissions, and they have the resources and influence to make a difference.

“The U.S. and China alone emit more than 40 percent of global greenhouse gas emissions, so what they decide or don’t decide to do will have a major bearing on other countries’ behaviors,” Busby says.

China has been making major efforts to fight climate change, and it’s able to do so expeditiously because of the simple fact that it’s an autocracy. The country is currently pouring hundreds of billions of dollars into renewable energy.

“China has moved quite fast. They have a centralized government controlled by a small number of people in the Communist Party,” Keohane says. “It’s the most centralized major government in the world. They have acted on climate change, and they might act even more vigorously on it.”

Could a democracy like the United States be able to respond to the climate crisis with a similar amount of haste? When a significant part of the public doesn’t think there’s a crisis, fossil fuel corporations own elected officials and everyone has to agree on the best way to address the problem before any action can be taken, it’s a lot harder to quickly respond to the threat.

“China has some advantages, with respect to the U.S., because if they decide they want to decarbonize, they can make major adjustments in industrial practices and close down dirty factories,” Busby says. “That’s harder to do in the U.S. context.”

That’s not to say that the U.S. should give up on democracy to fight climate change, but it’s possible we’ll end up in a situation where the president needs to be given, at least temporarily, sweeping powers to make the changes that will be needed to avoid a climate catastrophe. It’s not unprecedented.

“The closest analogy was World War II. In World War II, we maintained a democracy but the president had extraordinary powers to manage the economy, to tell corporations what to produce,” Keohane says. “GM stopped producing cars entirely. It was producing tanks and other war equipment.”

Keohane says if you want to consider how we might maintain a democracy but also quickly respond to a threat, the way we’ve responded when a war has broken out may be similar to what we’ll end up having to do.

“If you want to think about a centralized response by democratic countries, then I think you want to look at what they did during total war,” Keohane says. “They remained democratic, but they gave tremendous powers to the central government — many of which were drawn back afterward. They were wartime powers.”

Busby says he can imagine a president being given “emergency powers” to address the climate threat.

It will take a strong agreement between the world’s nations to properly address the climate crisis, and it needs to happen soon. With leaders like President Donald Trump pretending the problem doesn’t even exist, we’re getting closer and closer to a dangerous tipping point where we could see countless climate refugees, Americans fleeing coastal cities and many more terrible effects.

“The longer we wait, the more likely it is we’ll have even more severe weather episodes, wildfires, floods and cyclonic events that create major pressure at once, as opposed to steady change,” Busby says. “We’re going to have major pressures to decarbonize in a hurry.”

More like this
Innovation
7.30.2022 11:00 AM
Congo peat swamps are under threat — with catastrophic environmental consequences
By Bart Crezee, Simon Lewis and The Conversation
Innovation
7.30.2022 10:00 AM
Railways around the world are literally melting — here’s why they can’t take the heat
By Kangkang Tang and The Conversation
Science
8.10.2022 3:27 PM
Climate change may push North America’s forests to a “tipping point”
By Tara Yarlagadda
Related Tags
Share: