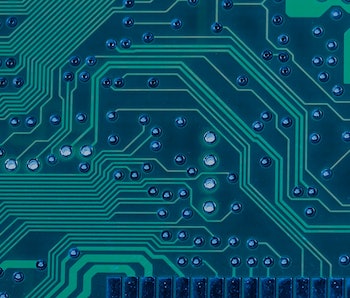 We’re getting closer to the point where we can process information on computer chips using light instead of electricity. A new study published in the journal Science explains how researchers at the National Institute of Standards and Technology (NIST) were able to develop an optical switch that can redirect light between computer chips using nanometer-scale gold and silicon components. The light can pass between chips in 20 billionths of a second, so… it’s pretty fast.

The researchers claim this is the fastest light has been rerouted between chips to this point, and it could change the way we transport data in certain systems. Photons, of course, travel much faster than electrons. Using photons to transfer data would also mean the computer wouldn’t heat up from the electricity, and using light instead of electricity would reduce a system’s energy use.

The researchers claim this technology could be used in everything from quantum computing to driverless cars to neural networks. This is the first time researchers have been able to develop a device this small that can efficiently reroute light in this way. It was previously thought that this could only be done using larger components. If they can make the device even just a little bit smaller, which they’re working on, it could be used in commercial products.

Christian Haffner, a researcher at NIST, tells Inverse that this technology won’t replace computer chips that use electricity because there are benefits to using electricity to transport information in certain scenarios, even if it’s not as fast.

Haffner says it will also be possible to create hybrid systems that use electricity and light to operate. He said electric chips can save and process data, and chips that operate using light can help speed up certain functions.

Until now, researchers have been able to build larger devices that can control light in the way that is needed to use it in a computer chip, but when they attempted to shrink down, there was a significant amount of loss. Essentially, light was being absorbed during the process. Haffner says their system is the appropriate size and doesn’t suffer from this kind of loss.

Optical fibers transmit information with light, but they’re too large to be used in smaller devices. This technique would allow light to be used to transport information at a very small scale.

“Optical fibers just have the purpose of transmitting light from one point to the other point,” Haffner says. “It’s a way to communicate over very long distances, but it’s just a passive component.”

Haffner explains that with optical fibers you can’t riderect the information in many different ways as you can with their system. It’s basically just a straight line from one place to another place.

The next project for this team is to make sure the system is as lossless as possible, and they’re going to see how small they can get it. Haffner claims the system is already small enough to be usable at this point, but things can always be smaller.

More like this
Innovation
7.28.2022 11:15 AM
A new robotic twist on the “Turing test” fools human subjects
By Sarah Wells
Innovation
7.25.2022 9:00 PM
One gene could boost plants’ resilience to extreme weather — and store more carbon
By Claire Cameron
Innovation
11 minutes ago
This self-healing material could fix your dinged-up car in 30 minutes
By Molly Glick
Related Tags
Share: