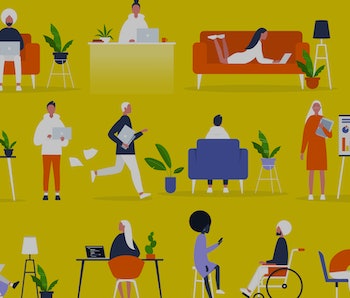 When the topic of climate change is being debated, those who want to sow doubt about if it’s a real threat will often reference something they refer to as “global cooling.”

They’ll say that scientists used to say that the world was actually going to start cooling down due to human activity, so don’t worry too much about climate change predictions, because scientists don’t know what’s going to happen. This is a fallacious argument.

Joshua Howe, an associate professor of history and environmental studies at Reed College, tells Inverse that the global cooling claim is junk science.

“That is a veiled reference that most people don’t even know they’re making to a period in the 1970s when a number of climate scientists were concerned about the ways that aerosols reflect sunlight,” Howe says. He explains that some scientists in that era published some papers related to this theory and that the media made it a big story, but it was wrong and had nothing to do with carbon dioxide levels.

“It wasn’t a consensus in the climate science community,” Howe says. “It was a couple of big scientists who thought that.”

This is just one example of misdirection by people who want to convince others that climate change isn’t a real problem, and that human activity is not causing it. When it comes down to it, scientists have actually done a pretty good job predicting how the planet will warm.

Michael Mann, a professor of atmospheric science at Penn State, points to the work of a former NASA scientist named James Hansen who published a study showing the Earth was warming due to greenhouse gases in 1988. Hansen appeared before Congress that year and warned lawmakers of what was happening. If you look at his predictions, he was pretty much on the money:

“Hansen made a remarkable prediction twenty years into the future,” Mann says. “And what the models tell us is that if we continue with business-as-usual burning of fossil fuels, we’ll cross increasingly dangerous thresholds … of warming in the near future.”

But what’s important to know is that climate predictions are not meant to be perfect explanations of exactly what the future holds. Howe explains that not only is there more than one prediction being looked at in any given time, the predictions are simply meant to imagine what will most likely happen in the future — based on current data.

Howe says groups like the CATO Institute, which was founded by oil industry leader Charles Koch, like to point out when a certain climate prediction didn’t come to fruition in exactly the way scientists expected as a tactic to make people question if any of the predictions are reliable.

“I think there’s a willful misinterpretation of what climate predictions are and what they mean,” Howe says.

There’s some good news, though. The climate change deniers are losing the debate, as we’re increasingly seeing in the polls. Polls from the past few years have shown most Americans think climate change is a serious problem, that humans are contributing to it, and that action needs to be taken immediately to fight climate change. This becomes even truer when you look at how millennials (people born between 1981 and 1996) view climate change.

Howe says the millennial generation largely sees climate change as a major problem, and the people trying to convince them to deny the science are going to have a pretty tough time doing that. While just over half of people over the age of 55 say they’re worried about climate change, around 70 percent of millennials feel this way. The Pew Research Center claims that millennial Republicans are “twice as likely as Republicans in the Baby Boomer or older generations to say the Earth is warming due to human activity.”

It would appear climate change deniers will have to change tactics if they’re going to convince people to stick with the fossil fuel industry. Howe says this group will likely start focusing solely on how fighting climate change would impact the economy.

“I think they’re going to fall back on what is perhaps their most robust argument — and that is the economic argument,” Howe says.

There are many ways climate predictions have been willfully misrepresented to make people question climate science, but it’s clear scientists are painting a picture that is quite accurate. The idea that any prediction would be 100 percent accurate is simply nonsensical. Millennials are helping kill climate change denial, and they’re the largest voting block there is, so politicians who deny the science probably won’t be able to stay in office for too much longer.