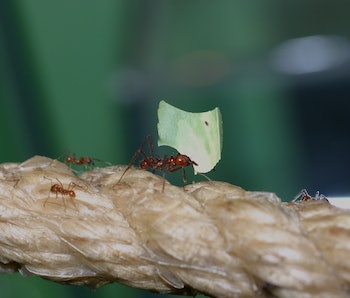 Antibiotics, one of the frontline defenses against infections in modern medicine, are becoming less and less effective. As growing numbers of bacteria become resistant to these antimicrobial drugs, more people will die of illnesses that used to be treatable — up to 10 million a year by 2050, predicts the World Health Organization.

Researchers have found that overuse of antibiotics over many years, both from doctors’ prescriptions and from use in farm animals, is driving this evolutionary arms race between us and diseases, and we seem to be losing ground. But new research in the journal Trends in Ecology & Evolution presents evidence that another animal has been fighting the same battle as we have.

The only difference? It’s winning.

In a study published on Thursday, researchers show that the leafcutter ant has been successfully fighting bacterial infections for much longer than humans have. This ant has farmed edible fungi in its colonies for 60 million years, assisted by a three-way mutualistic relationship with the fungi and with bacteria that fight off parasites from the fungi.

But unlike humans, the leafcutter ant has not run up against the threat of antimicrobial resistance.

In his team’s research on antimicrobial-resistant bacteria, Massimiliano Marvasi, Ph.D., a microbiology researcher at the University of Florence in Italy and the study’s corresponding author, tells Inverse that they began to wonder how ants could have achieved this feat. Whereas bacteria have evolved to evade human-made antibiotics in a handful of years, how has the leafcutter ant kept up its defenses for millions of years?

“We became fascinated by this system and the apparent paradox that whilst we observed rapid selection of resistant strains in the environment (under specific selective pressure conditions), this didn’t occur in the ants’ fungus gardens,” says Marvasi.

“When we compared this apparent longevity of antibiotic efficacy with the rise of antibiotic resistance in clinical settings the contrast was clear and set us wondering whether we could learn from the ants’ system.”

And what they learned was that the ants carry on their bodies a formidable and flexible defense force whose strength lies in its ability to produce a wide variety of antimicrobial compounds.

Previous research has shown that leafcutters have certain species of bacteria on their bodies, and while different individual colonies have different species, they have all co-evolved with their host ants. These bacteria are crucial because they produce antimicrobial compounds that fight off a parasitic type of fungus that endangers the cultivated fungus, which grows specifically on the leaves that ants bring back to their colony.

It’s a perfectly orchestrated relationship that has evolved over tens of millions of years: Without these bacteria, which survive on the fungus the ants grow, there would be no edible fungus and no ants to eat it. This so-called “tripartite mutualistic” relationship, involving three mutually benefiting organisms, is all made possible by the bacteria’s adaptability.

It’s kind of like replacing a windshield on a car instead of buying a whole new car. Right now, hospitals are stopping the use of antibiotics when they stop working — aka scrapping the car — but this research suggests that smaller tweaks could be more effective responses to antimicrobial resistance and less labor intensive than developing a new drug from scratch.

So what exactly can we learn from ants in our fight against antimicrobial-resistant bacteria?

As far as bringing these results into hospitals, Marvasi says it’s a bit too soon to tell what that would look like. But he thinks his team’s research shows that there are definitely some unexplored avenues doctors could start investigating more closely.

“It is early to say if this model can be applied to the healthcare system,” he says.

“If the tripartite mutualism of the leaf-cutter ants has taught us anything, it is that we can probably develop the use of antibiotic mixtures much further than has currently been tried,” he adds.

Abstract: Attine ants use antimicrobials produced by commensal bacteria to inhibit parasites on their fungal gardens. However, in this agricultural system, antimicrobial use does not lead to overwhelming resistance, as is typical in clinical settings. Mixtures of continually evolving antimicrobial variants could support these dynamics.