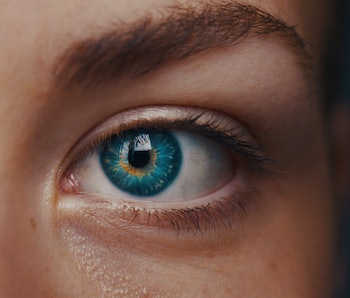 Fortunately, scientists already know how to beat the lie detectors of the future, which will rely on brain scans. But even our best attempts at deceit may be destined to fail in the face of a new test. As research published Wednesday in Cognitive Research: Principles and Implications shows, there’s one type of information that humans are extremely bad at concealing.

It turns out that people really struggle to conceal whether they’re familiar with a face, explains lead study author Alisa Millen, Ph.D., a psychology research fellow at England’s University of Stirling. The more we try to hide our recognition of a face, her results suggest, the more we lean into some basic tells that give us away.

“There are clear differences in where people look and for how long when comparing recognition of familiar faces to identification of an unfamiliar face,” she tells Inverse.

Her study doesn’t bode well for anyone trying to keep their social circles private, but it is filled with some helpful notes for those who might try, though she is trying to keep the information slightly vague for security reasons.

“Giving away too much about the exact nature of these changes would have implications for the usability of such technology in the future,” she says.

The technology Millen is talking about is eye-tracking software that’s intended to quantify exactly how our gaze moves from point to point on someone’s face. You could imagine this technology being used by law enforcement while showing people pictures of a potential co-conspirator, for instance. In the paper, they envision the situation going down like this:

Suppose you are being questioned by police about a crime. They show you a picture of the victim, or of your accomplice, either of whom you should know only if you were involved.

Naturally, if you were guilty, you would deny knowing your accomplice. So, Millen’s study set out to see whether there was a way we could tell whether someone’s eyes gave away key signs that they recognized a face, even if they claimed not to. And it turns out that our eyes are very likely to give away that key information.

In the experiment, Millen and her team had 48 psychology students look at pictures of both familiar and unfamiliar faces. First, people responded honestly about which faces they did and didn’t recognize. Then, they had to try to appear honest while lying about it. Some were told to conceal their true levels of recognition any way they could, but others got some advice: Specifically, they were told to circulate their gaze around the face in a fixed sequence.

In both cases, Missen found that eye-tracking software turned up signs of recognition. When they were lying, both groups of people gazed slightly longer at the faces that they recognized compared to when they were honest. But they also looked at specific areas of the face in different ways. Those who weren’t told to look at the face in a certain way gazed into the eyes of the people they recognized. People who were told to try to cheat the test avoided the inner areas of the face when they had to lie about recognizing it.

Areas of the face aside, time spent looking into a familiar face seems to be the most powerful indicator of deception. In the paper, the team calls is a “a stable marker of recognition” that could reveal a lie, despite attempts to conceal it.

The Future of Eye Tracking and Interrogation

Millen explains that our compulsion to involuntarily gaze upon a familiar face could be useful for uncovering criminal networks. The way she envisions it working is similar to a technique that’s already used in interrogation called the Concealed Information Test.

In that test, the suspect is attached to a traditional lie detector. Then the interrogator asks them a question, like “what was the murder weapon,” then lists the murder weapon along with other objects. In this paper, the authors refer to the Concealed Information Test as “the most scientifically validated protocol for the detection of concealed knowledge,” partially because it has a reputation for having a very low false positive rate. In other words, an innocent person is unlikely to fail this test.

Now, Millen’s results suggest that the same principle could work for faces too because eye-tracking can reveal powerful signs of recognition, no matter what someone says. Though she’s hesitant to say if this will be adopted any time soon (more research will have to be done before it goes anywhere), for now, she believes that it has powerful potential.

Results: In the standard guilty group, lies about recognition of familiar faces showed longer average fixation durations, a lower proportion of fixations to the inner face regions, and proportionately more viewing of the eyes than honest responses to genuinely unknown faces. In the countermeasures condition, familiar face recognition was detected by longer fixations durations, fewer fixations to the inner regions of the face, and fewer interest areas of the face viewed. Longer fixation durations were a consistent marker of recognition across both conditions for most participants; differences were detectable from the first fixation.

Conclusion: The results suggest that individuals can exert a degree of executive control over fixation patterns but that: the eyes are particularly attention-grabbing for familiar faces; the more viewers look around the face, the more they give themselves away; and attempts to deploy the same fixation patterns to familiar and unfamiliar faces were unsuccessful. The results suggest that the best strategy for concealing recognition might be to keep the eyes fixated in the centre of the screen but, even then, recognition is apparent in longer fixation durations. We discuss potential optimal conditions for detecting concealed knowledge of faces.

More like this
Mind and Body
8.7.2022 2:00 PM
Living near one neglected piece of urban eye candy can greatly boost mental health
By Sarah Sloat
Mind and Body
8.3.2022 11:30 AM
The brain’s memory hub may explain why some people get PTSD and others don’t — study
By Miriam Fauzia
Mind and Body
21 hours ago
How do you get monkeypox? An epidemiologist explains what “close contact” means
By Rebecca S.B. Fischer and The Conversation
Related Tags
Share: