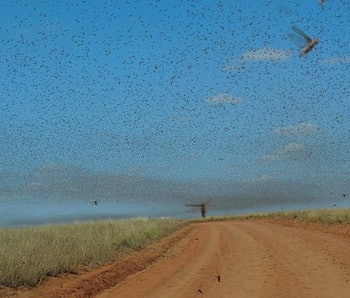 What’s good, Inverse Daily fam? I am stunned but not really surprised that “Old Town Road” is now Billboard’s longest-running No. 1 song of all time. Give it one more listen (or not), and join me into a deep dive of today’s news.

But first: It’s the last week of the month! That means you have just a few days to increase your Inverse Daily rewards rank. Search your inbox for any old emails you may have missed to quickly level up.

“Even though there is currently no official statement, we have a very good idea of what might have happened.”

— Georg Steinhauser, Ph.D., on what we now know about the mysterious cloud of radioactive ruthenium-106 that blew over Europe in 2017.

I can’t think of TESS, NASA’s Transiting Exoplanet Survey Satellite, without thinking of Tess Ocean (played by peak Julia Roberts) in Ocean’s 11 and 12. Both get involved in insane schemes — one to rob a Las Vegas casino blind, one to search for all the exoplanets we can see in 85 percent of the night sky. Against all odds, both have been extremely successful in their ventures.

On Monday, we learned that all-caps TESS has just discovered three new exoplanets orbiting a star 73 light-years away. If you’re thinking, “Ok, TESS has already found a bunch of these,” you would be partially right, but importantly, this time around, two of the exoplanets are very similar to Neptune and are within the habitable zone. That’s very unusual for a dense, frozen planet with a hydrogen-helium composition, Scott Snowden tells me. Something to fold into Ocean’s 9?

Check out the latest discoveries from TESS here.

Perhaps it’s a little on the nose that a plague of grasshoppers would descend upon the Luxor pyramid in Las Vegas in 2019, but here we are. Visitors and inhabitants of Sin City have been beset by swarms of the winged insects, which, fortunately, are not as hazardous as their biblical counterparts, locusts. Unfortunately, locusts have invaded Sana’a, Yemen’s largest city, halfway across the globe. There, the United Nations has been busy releasing dire warnings to locals, whose crops are in danger.

Why does one swarm warrant that kind of response while the other gets shrugged off? As Emma Betuel explained to me, the biological answer is complicated: All locusts are grasshoppers, but not all grasshoppers are locusts. Under regular conditions, a locust is a species of short-horned grasshopper that is quite solitary and pretty unremarkable, but with the right trigger, it goes through a wild transformation that puts it into a “gregarious” phase, making it super social and ready to swarm.

Find out why grasshoppers in Las Vegas aren’t as much of a concern.

We’ve talked a good deal about floating cities, which are, for better or for worse, becoming an increasingly appealing way to deal with the future that the climate crisis has in store. In April, UN Deputy Secretary-General Amina Mohammed praised the concept: “Floating cities are a means of ensuring climate resilience, as buildings can rise along with the sea.” Less environmentally driven folks are excited about them, too, envisioning them as liberatrian-esque “startup societies,” as Mike Brown tells me.

Not everyone is that jazzed. Peter Newman, a professor of sustainability at Curtin University, warns that some concepts ignore some of the bigger questions about how communities are actually formed. If nobody has any real stake in the city’s development, he says, these floating cities may end up a lot more like ghost towns.

Learn about the downside to ocean living.

A Matter of Taste

Over 1.9 billion adults around the world were overweight in 2016, according to the World Health Organization. Of those people, over 650 million were classified as obese — a large slice of the 7.4 billion people on the planet at that time. That proportion is increasing fast, but at least scientists are starting to get a better grip on what drives obesity in the first place.

The food supply, climate change, and cultural shifts all play major roles, but to a certain degree the trend is physiological. And it’s not just about increased hunger, either. As Emma Betuel tells me, new evidence suggests that obese people taste their food differently, and this leads to their eating experiences being less satisfying.

Find out how this pattern can develop over time.

With so much bombarding us from every screen, speaker, and real-life interaction, modern life can be extremely overwhelming. For me, even the number of unread messages in my inbox (several thousand and rising) can feel insurmountable. If I can’t even deal with Gmail, how will I deal with actual changes in my life?

In the words of Travie McCoy (or The Allman Brothers, if that’s more your thing), you’ve got to keep on keeping on.

In more scientific terms, this is called “resilience”: the ability to handle adversity when it strikes. As Sarah Sloat tells me, becoming more resilient is possible, even if it feels like it’s not. For most people, building resilience comes down to four factors: mindfulness, exercise, support from other people, and — very important! — optimism.

Click here for a deep dive into the science of resilience, and if you want more useful tips on keeping your mental health in check, sign up for Inverse’s Sunday Scaries newsletter. Trust me — it’s useful every day of the week.

Because life on this planet is only going to get better if we try to make it better, each day I’ll be presenting One Good Thing humans are doing to create positive change.

Today, that’s Ethiopia, which planted more than 353 million trees in 12 hours in a concerted effort to beat climate change. If you’re in the US, find out how you can help do the same here.

Have you ever experienced a huge grasshopper or locust swarm? Tell me your weirdest stories at yasmin@inverse.com.

He opened up his mouth and out came the locusts,