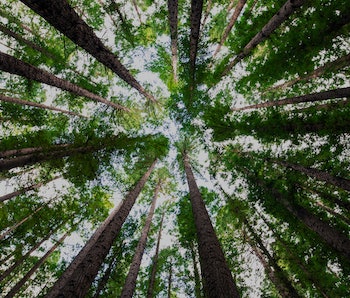 Planting almost a billion hectares of trees worldwide is the “biggest and cheapest tool” for tackling climate change, according to a new study. The researchers claimed that reforestation could remove 205 gigatons of carbon from the atmosphere — equivalent to about 20 years’ worth of the world’s current emissions. This has been criticized as an exaggeration. It could actually be dangerous.

While the paper itself included no costings, the researchers suggested a best-case estimate of just $300 billion to plant trees on 0.9 billion hectares. That’s just 40 US cents per ton of carbon dioxide (CO₂) removed. More detailed studies on the costs of carbon removal through reforestation put the figure closer to $20-50 per ton — and even this may be optimistic at such large scales.

Our research suggests that the promises implied in such studies could actually set back meaningful action on climate change. This is because of what we call “mitigation deterrence” — promises of cheap and easy CO₂ removal in the future make it less likely that time and money will be invested in reducing emissions now.

Why would anyone expect governments or the finance sector to invest in renewable energy, or mass transit like high-speed rail, at costs of tens or hundreds of dollars a ton if they — and shareholders and voters — are told that huge amounts of CO₂ can be absorbed from the atmosphere for a few dollars a ton by planting trees?

Why should anyone expect energy companies and airlines to reduce their emissions if they anticipate being able to pay to plant trees to offset everything they emit for the paltry price of less than 50 cents a ton. If studies like this suggest removing carbon is cheap and easy, the price of emitting carbon for businesses — in emissions trading schemes — will remain very low, rather than rising to the levels needed to trigger more challenging, yet urgently needed, forms of emission reduction.

The promises of cheap and powerful tech fixes help to sideline thorny issues of politics, economics, and culture. But when promises that look great in models and spreadsheets meet the real world, failure is often more likely. This has been seen before in the expectations around carbon capture and storage.

Despite promises of its future potential in the early 2000s, commercial development of the technology has scarcely progressed in the last decade. That’s despite many modeled pathways for limiting global warming still assuming — increasingly optimistically — that it will be deployed at a large scale in coming decades.

This model of tackling climate change goes hand in hand with another tool — pricing carbon emissions. This potentially allows companies to go on emitting by paying someone else to cut emissions or remove CO₂ elsewhere — an approach called climate offsetting. But offsetting makes exaggerated promises of carbon removal even more risky.

Tree planting financed through offset markets would guarantee the polluter could continue emitting carbon, but the market couldn’t guarantee removals to match those emissions. Trees might be planted and subsequently lost to wildfire or logging, or never planted at all.

Trusting in trees to remove carbon in the future is particularly dangerous because trees are slow to grow and how much carbon they absorb is hard to measure. They’re also less likely to be able to do this as the climate warms. In many regions of the world but particularly in the tropics, growth rates are predicted to fall as the climate warms and devastating wildfires become more frequent.

Relying on trees to absorb CO₂ from the atmosphere in the future also appears misleadingly cheap because of the effects of economic discounting. Economists discount the current value of costs or benefits more deeply the further in the future they occur. Models which determine the cheapest mix of policies available all use some form of discounting.

When researchers add carbon removal options like tree planting to these models, they tend to generate pathways for slowing temperature rise which reduce the role of short-term action and replace it with imaginary removals late in the century.

This is because discounting over 30 to 60 years makes the removal options look incredibly cheap in today’s prices. Priming models to focus on minimizing cost causes them to maximize the use of discounted future removals and reduce the use of more expensive near-term emissions reduction.

I am not arguing against reforestation, nor for a purely technological response to climate change. Trees can help for many reasons — reducing flooding, shading and cooling communities, and providing habitat for biodiversity. Incentives for reforestation are important, and so are incentives for removing carbon. But we shouldn’t make trees or technology carry the whole burden of tackling climate change. That demands moving beyond technical questions, to deliver immediate political action to cut emissions, and to begin to transform economies and societies.

This article was originally published on The Conversation by Duncan McLaren. Read the original article here.

More like this
Science
8.3.2022 12:15 PM
Look: 7 Great Salt Lake images reveal how shockingly fast its shrinking
By Jennifer Walter
Science
7.25.2022 7:00 PM
Humans wear cotton every day — now, the plant needs genetics' help to survive
By Serina Taluja and The Conversation
Science
7.24.2022 1:00 AM
Too hot to sleep? Why your nights are only going to get so much worse
By Stephen Burt and The Conversation
Related Tags
Share: