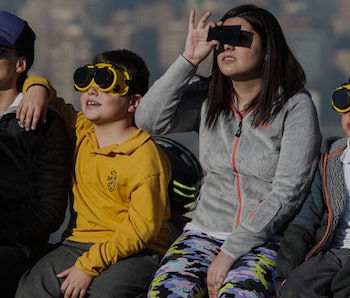 The total solar eclipse that gently breezed over South America Tuesday afternoon was watched by millions around the world, not only in Chile and Argentina, where the best view was to be had, but also online in real time as the cosmic ballet unfolded.

According to The Times of Chile, celebrity eclipse aficionados making the pilgrimage included lead guitarist Brian May from the band Queen (who also happens to be an astrophysicist) Microsoft founder Bill Gates, former US president Bill Clinton, and Virgin Galactic founder Richard Branson. Although none of these have been officially confirmed. (On closer inspection however, it looked like Brian May was actually tweeting from rehearsals in California.)

“Astronomy and the beauty of the pristine Chilean skies will be showcased to the entire world, as the rarity of the total eclipse will attract thousands of people, from both Chile and further afield, to the north of the country,” Claudio Melo, European Southern Observatory (ESO) spokesperson in Chile said in a statement.

How a Total Solar Eclipse Occurs

The view from orbit was just as amazing, but for slightly different reasons. A major hurricane was percolating above the Pacific ocean north of the equator and just west of Mexico.

Hurricane Barbara was officially declared a Category 4 storm on Tuesday and was visible from space at the same time as the eclipse.

Both phenomena were captured by cameras on satellites in geostationary satellites hovering roughly 22,300 miles from Earth’s surface. The College of DuPage’s NEXLAB satellite captured it all in glorious color and it was processed into a stunning timelapse by meteorologist Dakota Smith.

Although solar eclipses happen a few times a year, total solar eclipses don’t occur that often. The next one is due to take place in December 2020, with the path of totality once again cutting across Chile and Argentina.

You can check out NASA’s eclipse website for a timetable of future eclipses.