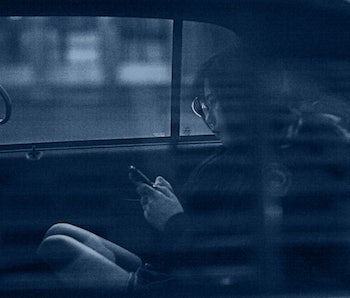 When we’ve got the blues, it’s so much easier to turn to our phones for comfort rather than deal with actual people. But a new study from Michigan State University warns that substituting real-life interactions for electronic ones could actually be making us sadder.

Publishing their work in the journal Computers in Human Behavior, the researchers looked at people who used their phones to seek out others in hopes they’d help relieve negative feelings, like sadness and depression. While electronic interaction does work as a temporary fix, problems arise when people start turning to it for long-term help.

This sort of behavior eventually makes psychological conditions even worse, leading to a state the researchers refer to as PUMP — “problematic use of mobile phone.”

“The research bears out that despite all the advances we’ve made, there is still a place for meaningful, face-to-face interaction,” said Prabu David, the dean of Michigan State University’s College of Communication Arts and Sciences, a co-author of the study. “The mobile phone can do a range of things that simulate human interaction. It seduces us into believing it’s real, but the fact remains it’s still synthetic.”

The study found that engaging with people face-to-face can prevent you from reaching the PUMP stage. “If you have a chance to see someone face-to-face, take it,” David said in a press release. “Life is short.”