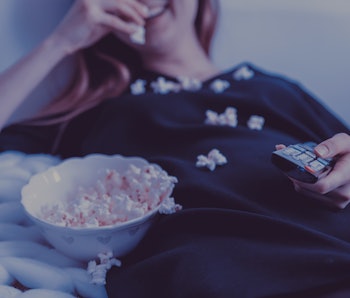 As a society, we sit too much. We sit in the car, we sit at our desks, and we flop down on the couch when we get home. But not all sitting is made equal. Each of these approaches to sitting poses a very different risk to heart health, according to research published Wednesday in the Journal of the American Heart Association.

"…maybe we should consider focusing on interventions that break up or reduce television viewing at home."

Though sitting at a desk may feel the most punishing, the study shows that for at least one population of Americans, it isn’t occupational sitting that’s taking the biggest toll on heart health. Instead, it’s the common, sedentary evening ritual of tucking into a meal in front of the TV and watching hour after hour of whatever show that has been selected to fill the void left by Game of Thrones.

Analysis of data collected from 3,592 African-Americans enrolled in the Jackson Heart Study revealed that people who spent four or more hours sitting in front of the TV each night were 49 percent more likely to have had a heart attack than those who spent less than two hours watching TV each day.

In comparison, people who reported the highest levels of occupational sitting had no significant changes in their cardiovascular disease risk compared to people who rarely sat for work, study author Jeanette Garcia, Ph.D., an exercise physiologist at the University of Central Florida, tells Inverse.

“Although I’m not suggesting that there are absolutely no health risks associated with lots of sitting at work, the results from our study indicate that maybe we should consider focusing on interventions that break up or reduce television viewing at home,” Garcia tells Inverse.

The Jackson Heart Study followed participants for a median of over nearly eight and a half years. During that time, 129 heart attacks and 205 deaths occurred (they were grouped together in this analysis). Garcia noted the pattern of increased risk within the data on those deaths. She thinks it likely has to do with other aspects of sedentary life that are correlated with spending long hours in front of the TV.

"Every little bit can help.”

The big difference between sitting at home versus sitting at work is that one tends to happen without interruption. In an office, sitting at a desk may be broken up by everyday activities like going to a printer, taking a coffee break, or visiting coworkers. Sitting in front of the TV, meanwhile, is uninterrupted sedentary time. Garcia notes that there may be additional risks that emerge from completely uninterrupted seated time during a TV binge.

“These types of activities can break up long periods of sitting, which is better than prolonged, uninterrupted sedentary time, which can occur more with television watching, especially at night when you’re tired,” she says. “Even when you’re sitting at your desk, you can be fidgeting or stretching which may not seem like much movement, but every little bit can help.”

The idleness associated with seated time aside, a host of additional health behaviors were also uncovered in Garcia’s findings.

"Therefore, even if you don’t feel you can forego your favorite television show, maybe consider going for a brisk 30-45 minute walk afterwards!"

“I do feel that societal factors may play an important role here,” Garcia explains. “It’s possible that socio-economic status may be a factor in that higher income and education tend to be linked with more ‘white-collar’ jobs that typically are in an office setting, while ‘blue-collar’ jobs typically tend to be more active.”

The more we learn about sitting, the more complicated its impact on our health becomes. One thing that’s becoming clear is that the time we spend sitting is a signifier of many other health factors beyond spending time on our bottoms. Fortunately, for those who spend more time sitting than is healthy, Garcia’s work points to a silver lining: Roughly 30 minutes of moderate to vigorous exercise can head off sitting-related health risks.

On that front, she offers some basic advice: “Therefore, even if you don’t feel you can forego your favorite television show, maybe consider going for a brisk 30-45 minute walk afterwards!”

Conclusions: Television viewing was associated with greater risk of CVD events and all-cause mortality, while occupational sitting had no association with these outcomes. These findings suggest that minimizing television viewing may be more effective for reducing CVD and mortality risk in African Americans compared to reducing occupational sedentary behavior.