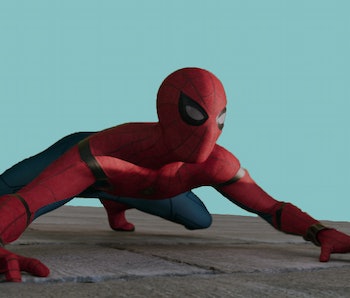 What do all of the over 45,000 described spider species on Earth have in common? Each makes at least one type of silk. And there are an awful lot of types out there.

An individual orb-weaving spider — the kind that spins the classic two-dimensional aerial spiral webs that seem to always be suspended at human face-height — can produce seven different silks, each with unique material properties.

Dragline silk forms the frame of an orb web and is famous for its strength and toughness, comparable to that of steel. The capture spiral is made of a highly stretchy version called flagelliform silk. Orb-weaving spiders use an additional type of silk to wrap prey and create web decorations.

But there’s another kind that, on the surface, doesn’t resemble silk at all: the sticky glue with which some spiders cover their silk capture threads. It doesn’t look like the classic threads that come to mind when thinking of spider silk, but the gluey substance from these webs is, in fact, a silk protein.

See also: Spiders Can Fly and They Don’t Even Need Wings, Study Claims

For many years, researchers have been uncovering the secrets of spider glue, which stays wet in its open air environment and sticky over many rounds of attachment and release. Its genetic blueprint has remained elusive, however, meaning scientists haven’t been able to think about setting up large-scale production of this potentially useful biomaterial.

Using new technology, my colleague and I have been able to sequence the first full genetic sequences that code for spider glue proteins.

Under a microscope, orb weaver glue resembles beads on a string — little glistening spheres along a strand of stretchy support silk. Instead of being spun into a fiber as it leaves the spider’s body like other silks, the glue proteins are extruded as a jumbled mass. Their job is to stickily retain prey that get caught in the web.

The glue of tropical orb weaving species is sticky in the spider’s wet habitat, but downgrades to just tacky in low humidity. The glue of orb weavers from dry regions becomes dilute and thin if the humidity is too high.

Bolas spiders forgo the orb web, and instead produce a large globule of glue at the end of a long strand of silk that they whirl rapidly through the air. The glue of this sticky snare is specialized for capturing moths covered with loose scales.

Widow spiders produce vertical, glue-covered trip lines that detach from the ground when encountered by an unsuspecting victim, springing the prey into the air where it hangs suspended. Unlike orb weaver glue, widow glue is resistant to fluctuating humidity.

These various specialized adhesive properties have intrigued biomaterials researchers who can dream up plenty of uses for artificial versions of spider glues. But without knowing the genes that code for these proteins, there hasn’t been a clear road map for how to produce synthetic spider glues.

Surprisingly, researchers have only sequenced around 20 full-length spider silk genes despite the incredible diversity of spiders and decades-old interest in silk as a useful biomaterial.

It turns out that not only are the properties of spider silk amazing, but so is the DNA code that stores the instructions for making the protein. Spider silk genes are extremely large; in itself that’s not a problem, but the bulk of their sequence is made from repeats of the same small DNA bits.

Imagine that the sentence “THE QUICK BROWN FOX JUMPED OVER THE LAZY DOG” is a sequence of DNA that encodes for a protein, but whose exact order of letters is still unknown.

In order to discover this sequence, the main method of DNA sequencing technology available today has three main steps. Once a DNA sample is collected, many copies of the sentence are randomly broken up into small pieces. For example, you might end up with a collection of fragments like “THE QU” “QUICK B” “BROWN FO” “WN FOX J” “AZY DOG” and on and on.

Then a DNA sequencing machine discovers each letter of each piece. The final step is stitching all the short pieces, technically called “reads,” back together in one sequence to figure out the original sentence.

For the sentence above, this is an easy task. The sequence of letters is unique, and as long as there are at least five characters in each read, it’s possible to figure out where one fits relative to another.

Sequencing a Long Read of DNA in One Go

For many years DNA sequencing has been limited to this short-read strategy: breaking a gene into bits and then reassembling into one cohesive sequence.

Setting aside some difficult and expensive techniques that are out of reach for standard labs, the best way to fully discover a long, repetitive gene is to sequence the repetitive part from start to finish in one go. Fortunately, emerging technology, while still in its infancy, is starting to allow this long-read sequencing by getting around the chemistry limitations of the short-read method. For those that study super repetitive DNA, this is excellent news. New types of DNA sequencers are finally resolving the “JUMPS.”

Now that two spider glue genes are fully sequenced, the first step towards making a synthetic version is complete. Researchers can now insert the genes into other organisms, like bacteria or yeast, to make the glue in bulk.

Unlike solid silks, the glue proteins do not have to be transformed from a liquid to a solid fiber, something spiders do effortlessly but that scientists have trouble replicating. The glue has the potential for many unique applications and is biodegradable, water soluble, and stays sticky for months or even years.

Imagine safer pest control or washable filters. Or frat boys wrestling in a kiddie pool of the stuff. Either way, someday soon it might be possible to reach your hand into a bucket of spider glue — the tricky part will be not sticking to whatever you touch next.

This article was originally published on The Conversation by Sarah Stellwagen. Read the original article here.