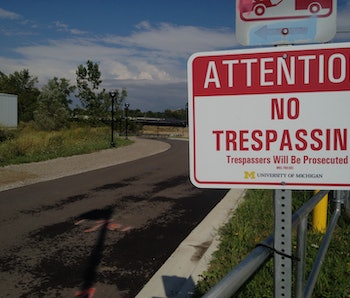 From the pine- and fir-dotted hill at the intersection of Huron Parkway and Baxter, you can just catch a glimpse of a tidy but deserted-looking downtown encircled by a chain-link fence. Crickets chirp; wind blows through stunted birches; a creek bed snakes through sawgrass toward the Huron River. These are the outskirts of MCity, a new proving ground for driverless, “connected” vehicles located in the quiet northeast corner of the University of Michigan’s sprawling campus.

Except on these proving grounds, no one will be behind the wheel.

Funded by the Michigan Department of Transportation, the U of M, and big-ticket auto companies including Ford, GM, and Toyota, MCity’s 32-acre streetscape was designed to play a role similar to the one played by the General Motors Proving Ground 35 miles away in Milford.

For the moment, the road leading to MCity is closed off — at least to guests. Aside from a big PR push during the facility’s “opening” on July 20th, MCity has been a quiet place, something closer to a lab than a racetrack. According to MCity spokesperson Susan Carney, tours of the facility won’t be held until sometime next year (though you can take the virtual tour any time you like).

This all makes sense, given that the tech tested here won’t hit the market for a long time. And given the strange road taken by driverless vehicles already, caution is the only reasonable course. Just look at Toyota. Despite premiering the first “driverless” vehicle in 2013, and integrating Lane Assist into their fleet, lawsuits and liability have cowed the Japanese auto giant. In 2014, Toyota’s deputy chief technology officer let slip that the company is steering away from driverless cars and towards safer models.

So why is Toyota’s name affiliated with MCity? Because it’s better to test a product behind a fence than fail on the other side of it.

For the moment, being on the outside of that particular fence is kind of frustrating. It’s also exciting, and unnerving, especially in light of the fact that the driverless revolution feels inevitable. The benefits — fewer accidents, increased productivity, shareable vehicles — promise to change the way we drive, sure, but also the way we live.

Good things and good engineering comes to those who wait. And with most of the auto industry mired in litigation surrounding recalls, the next generation is inheriting what a lot of next generations have inherited: a mess.

MCity is ahead of its time and its time kind of sucks.

One thing we do know: Google’s self-driving cars are already on the road — though years away from a showroom. That gives the auto industry — the people who actually sell vehicles — a chance to stave off their own obsolescence. It won’t be easy, and it won’t happen quickly. Carney says we’re unlikely to see driverless vehicles on the roads of Ann Arbor any time soon. But she’s not exactly speaking in geologic terms. The University of Michigan has set a goal of putting 20 to 30 tested vehicles on the roads of Ann Arbor within six years.

They couldn’t have picked a better spot to smooth things out, or see that goal to its conclusion. MCity is strategically located in a place where the Big Three are still big. General Motors’ main research and development facility is in Warren. Ford’s is in Dearborn. Toyota recently expanded its own research facility in Ann Arbor.

This is a part of the country that still likes to boast that it put the world on wheels, and it’s putting forward a concerted effort to take over the controls and let the sensors do the driving.

That future waits down the road—or behind the shrouded fence. You can get excited. Just don’t bother asking for a tour.

More like this
Innovation
8.17.2022 6:15 PM
Can we terraform Mars? Scientists may have made a major breakthrough
By Jeff Nagle
Innovation
8.12.2022 10:30 AM
Will Miami exist in 2050? 4 strategies could keep U.S. coastal cities afloat
By James Gaines
Innovation
8.13.2022 9:00 PM
Electric vehicles could transform U.S. cities — but not for the reason you think
By Erica D. Walker and The Conversation
Related Tags
Share: