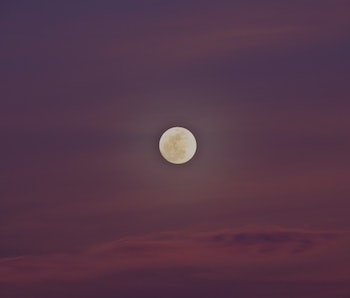 On Friday night, the Pink Moon will rise. But don’t get too excited about glimpsing a rose gold sphere in the sky; the April full moon’s name isn’t meant to be descriptive. Just like the Worm Moon wasn’t full of worms and the Hunger Moon didn’t swallow anyone up, the Pink Moon’s name refers to the cycles of nature that helped the original inhabitants of America mark the passing of time and plan for the future.

That’s not to say Friday’s full moon won’t be impressive. The Pink Moon will just so happen to appear larger in the sky than the average full moon.

Why Is It Called the Pink Moon?

The Old Farmer’s Almanac outlines how the name Full Pink Moon came from native Americans who marked time by lunar cycles rather than the solar cycles marked out in the Gregorian calendar. Around the same time that the Pink Moon rose, the spring flowers usually began to bloom. One of the earliest bloomers, native to North America, is wild ground phlox.

Home gardeners will know that phlox’s blooming marks the official start of spring, but they may not know that they’re participating in a long-standing tradition of observing the natural world to mark the passage of time.

And just as spring means the phlox is in bloom, it also means it’s time to get summer crops in the ground as soon as possible. So while the Pink Moon may have an aesthetic partner on the ground, its real importance to early Americans was that it marked the beginning of the agricultural season.

When Can You See the Pink Moon?

The US Naval Observatory reports that the Pink Moon will rise at 8:02 p.m. Eastern on Friday, April 19 and set at 6:38 a.m. the following morning, 4/20. The sun will rise around the same time, so there won’t be much overlap between the full moon and the rising sun, but you will be able to see the full moon all night.

Will the Pink Moon Be a Supermoon?

The moon is just past its perigee, the closest point in its orbit to the Earth. The perigee happened on April 16, so even though the moon will appear larger than normal in the sky, it will not technically be a supermoon.

Stepping back a bit, though, a “supermoon” is emphatically not an astronomical thing. As Inverse previously explained, the term was coined by astrologer (not astronomer) Richard Nolle, who linked so-called supermoons to extreme geological disasters like earthquakes and volcanic eruptions.

So if you want to step out into the cool, spring air and enjoy the Pink Moon tonight, go for it. Just be careful not to trample your neighbor’s phlox while you’re gazing at the night sky.

More like this
Science
8.1.2022 6:15 PM
Sturgeon Moon 2022: Why this month's Full Moon may be one of the best to see
By Elizabeth Howell
Science
10 hours ago
Beware! Dramatic image of spiral galaxies previews the future fate of the Milky Way
By Kiona Smith
Science
8.9.2022 4:00 PM
Look! Hubble snaps a dazzling image of the Orion Nebula's surreal rainbow clouds
By Kiona Smith
Related Tags
Share: