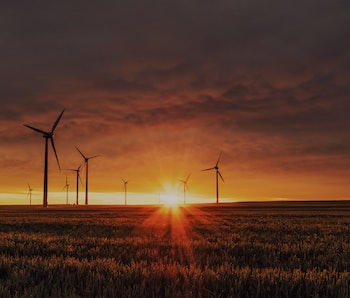 Human activity on Earth has detrimentally affected the Earth’s climate, which has led to whole nations melting away, animal extinction, and potentially the disappearance of clouds. But there’s a possibility that the severity of climate change could can be mitigated, if we act fast and leverage another human inventions: artificial intelligence.

Google’s London-based, A.I. subsidiary DeepMind announced this week its most recent accomplishment, using machine learning to help make wind energy more valuable to the power grid. The company’s algorithm was able to predict how much power its wind turbines would generate 36 hours ahead of time, the company explains in a blog post. This would allow wind farms to reliably delivery exact amounts of power to meet electricity demand.

DeepMind applied its A.I. to 700 megawatts of wind power capacity in the Midwest. The algorithm was trained on weather forecasts and past turbine data to predict power output. Google stated that its effort improved the value of these wind farms by “20 percent.”

Giving wind farms the ability to make data-driven decisions is a small step toward decreasing dependance on coal and fossil fuels. A.I. has great potential to give scientists, farmers, and engineers a better understanding of the effects of climate change, and processes enormous sets of data in the blink of an eye. It can spot patterns where humans at first only see jumbled numbers, and it can deliver the precise information scientists need to act decisively.

The Brookings Institution and the World Economic Forum both published reports of how A.I. can be harnessed to reduce the mounting affects of climate change recently, and many of them have already been implemented to a degree.

Google’s announcement is the beginning of smart energy distribution that will make wind and solar farms big players in the global power grid. Widely available weather forecast data can be used to accurately estimate how much wind will blow and how sunny it’ll be on any given day.

“Better day-ahead and hour-ahead predictions of how clouds and other weather formations affect solar output,” he writes. “Better forecasts can make it easier and more lucrative for solar generators to participate in electricity markets.”

Weather and climate scientists are constantly collecting data about what is being and what will be affected by the Earth’s changing climates. The state of the ozone layer, rising sea levels, and the temperature of the world’s oceans are all painstakingly tracked and published. A.I. can take these figures and transform them into tools.

Machine learning algorithms feed off numbers, and the more data those algorithms have, the more predictions can made and more hidden patterns can be detected. Unifying the climate data available today can create guidelines to let scientists, engineers, and everyday people know what needs to be done first to slow down climate change.

The WEF’s report stated that using A.I. to create models of data can be help experts get a grasp of what is highest priority right now and give citizens a better understanding of how bad climate change is.

“Datasets has demanded substantial high-performance computing power and limited the accessibility and usability for the scientific and decision-making communities,” states the WEF. “A.I. can solve these challenges, increasing both the performance of weather and climate modeling, and making it more accessible and usable for decision-making.”

A.I.’s incredible ability to parse through almost endless amounts of numbers could be used to bring about autonomous farming. Geological data can tell algorithms what can be grown in any given area and real-time crop data could be collected to detect any issues during growth.

The farming industry is already dominated by machines and it could one day be completely run by machines. These robots could be directed by a machine learning algorithms that are constantly checking on soil, plant health, and weather data.

This will require vast improvements of vehicle autonomy and the coalescing of a tons of data. But the WEF states that fully autonomous farms aren’t far-fetched.

“A.I. could enable farms to become almost fully autonomous,” it states. “Farmers may be able to grow different crops symbiotically, using AI to spot or predict problems and to take appropriate corrective actions via robotics”

The extreme weather affects of climate change have brought about long-lasting droughts and wildfires. Ensuring that communities affected by these human-made catastrophes has adequate fresh water is crucial and A.I. can make that happen.

Utilizing data from internet connected home water meters, algorithms could detect what parts of the world need the most resources. The system could then redirect more water to areas undergoing droughts to ensure resources are being deployed where we need them most.

The WEF suggested this could be realized by merging IOT technology to collect data from homes, machine learning to process that data, and blockchain tech to decentralize water resources.

More like this
Innovation
8.12.2022 10:30 AM
Will Miami exist in 2050? 4 strategies could keep U.S. coastal cities afloat
By James Gaines
Innovation
13 hours ago
This high-tech camera may help protect our identities — here's how it works
By Molly Glick
Mind and Body
8.15.2022 10:00 AM
Sunscreen is crucial for public health — it must be safe for the environment, too
By Karen Glanz, Robert Richmond and The Conversation
Related Tags
Share: