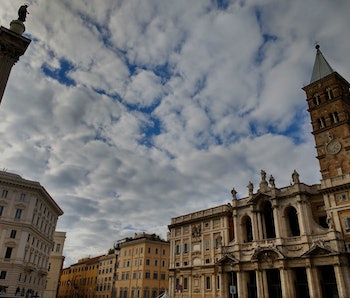 Here is a small sampling of the many things climate change has already ruined: Greenland, human mental health, and the very cute bramble cay. Now, as scientists predict in a controversial Nature Geoscience study, climate change is coming for clouds. Even these ubiquitous parts of the sky may not be safe from the damage we’ve caused.

In particular, the paper, published Monday, shows that climate change could soon have a big effect on stratocumulus clouds — the thick sheets of fluff we see when the weather forecast reads “overcast.” On nicer days, they are the lines or waves of cotton balls striping the sky. More than just daydream fodder, these clouds play an important role in keeping the world’s climate stable: The tops of stratocumulus clouds are reflective, causing a lot of sunlight to bounce back into space instead of zapping the Earth.

As global temperatures continue to climb, we can use all the reflective surfaces we can get. Earth is nearing a point where stratocumulus clouds — which cover a whopping 20 percent of the oceans around the equator — could vanish, say the researchers, led by Caltech Jet Propulsion Laboratory climate dynamicist Tapio Schneider, Ph.D..

How Clouds Could Disappear

Schneider and his colleagues created a computer simulation to model how cloud dynamics in a “representative subtropical region” (more on this controversial detail later) would change as greenhouse gas concentrations rise. They determined that stratocumulus decks “become unstable and break up into scattered clouds” when the level of carbon dioxide rises above 1,200 parts per million (ppm) — “which can be reached within a century under high-emission scenarios.”

Currently, Earth’s atmosphere is at 400 ppm of CO2; before industrialization, it was at 280 ppm.

Without the stratocumulus decks to reflect sunlight away from the Earth, the model predicts that global surface temperatures will rise by 8 kelvins (that’s 8 degrees Celsius, or 14.4 degrees Fahrenheit). In the subtropics, temperatures will rise by 10 K (10 °C; 18 °F). The worst part is that the clouds can’t re-form until the carbon dioxide level dips below 1,200 ppm — and carbon dioxide stays in the atmosphere “forever.” When carbon dioxide levels reached 1,600 ppm in the model, all that were left were scattered fluffy cumulus clouds — pretty, but not the best for reflecting solar radiation.

No scientist in their right mind will argue that it’s not important to reduce carbon dioxide emissions to a reasonable level, but some cloud scientists have taken issue with Schneider’s analysis.

Scripps Institution of Oceanography researcher Joel Norris, Ph.D., for one, told Science that Schneider’s model was “simple” and that “it is very likely that the Earth has more knobs than that.” He, like other scientists interviewed in that article, took issue with the fact that Schneider’s team only looked at cloud dynamics in the aforementioned “representative subtropical region” and then applied it to every other part of the world with similar cloud decks. Because of the model’s oversimplified design, many of the scientists interviewed don’t have faith in the 1,200-ppm “tipping point,” instead suggesting that if the clouds vanish, it won’t be all at once.

Scientific squabbling aside, the important thing here is that scientists “improve the parameterizations of clouds and turbulence in climate models,” as the authors write. In other words, they must pay special attention to the way cloud dynamics will factor in as climate change continues to reshape our planet. Doing so isn’t standard yet, since clouds, which are so variable around the world, are tricky to model in a global simulation. Still, that’s why scientists like Schneider and others are doing this kind of work on clouds, which we all have taken for granted for far too long.