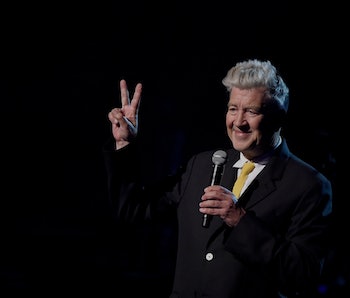 Lynchian is a term that we’ve already covered here at Inverse. In a nutshell, it’s an adjective used to attribute the abstract style of David Lynch to another piece of art. Or anything really that perverts the norms of reality into a dastardly nightmarish landscape. David Foster Wallace summed it up nicely, when he said:

“An academic definition of Lynchian might be that the term ‘refers to a particular kind of irony where the very macabre and the very mundane combine in such a way as to reveal the former’s perpetual containment within the latter.’”

Therefore, you could easily use the word to describe a humdrum activity that escalates into a mind-bending experience — i.e. eating a meatball sub only to discover halfway through that you’re actually feasting on your own arm. A hallucination? Psychotic break? Either way, that shit’s Lynchian. “I had a rather Lynchian lunch break today,” you might say afterwards, when recalling the grotesque moment to your co-workers, as blood oozes from your tourniquet.

It’s in this vague arena of the surreal that Lynch has staked his claim. Some of his most mainstream work skates closer to the periphery of ‘normal’ — The Elephant Man, The Straight Story — while his fanbase has lapped up the oddities that comprise the bulk of his output, such as Twin Peaks, Lost Highway and Mulholland Drive. Thing is, there’s more to Lynch than the work he’s created for popular consumption. As an artist he’s cranked out a ton of his most Lynchian stuff through other channels. Here’s some of his best.

The first short of Lynch’s that notified the world of his greatness. His initial goal was to witness his paintings — he’s also a bit of a dab hand with a brush — come to life. The result is six sketched heads attached to stomachs via pipes. Their tums fill with blood, explode, then the heads vomit an unknown white substance. Repeat X6.

The tell-all title gives much of the surprise away. This is a fake commercial for Anacin. Presenting the experience of having a headache with kinetic splendor, it’s a lot more realistic than the stiff actors in today’s commercials who gently try to soothe headaches by rubbing their fingers on their temples.

Shot with the Mulholland Drive cast (although you can’t tell on account of all three wearing oversized bunny heads), Rabbits is a series of short vignettes that when stitched together are less a ‘sitcom’ as it’s described, but more a 45-minute slow descent into madness involving that hideous rabbit from The Twilight Zone movie and a laugh track. Pop this on after a night out for a truly harrowing comedown.

This series of eight animated shorts about an angry man called Randy were drawn, voiced, edited, and directed by Lynch. The whole thing runs for 30 minutes so it’s worth watching, especially to hear the line “one-armed duck fucker.” And then there’s a thing with anthropomorphic foul-mouthed ants.

Lynch’s other television series haven’t received quite the same cultish praise as Twin Peaks, which is a shame as they’re both equally as whacked-out. Hotel Room ran for three episodes on HBO across two nights in 1993, with Lynch directing two of the episodes based on scripts by Barry Gifford (who wrote Wild At Heart) and Jay McInerney (who did 80s hedonism better than Bret Easton Ellis.)

On The Air is what 30 Rock might have turned out like if Lynch had got his dabs on it.

Selling video game consoles hardly seems like Lynch’s thing. Which is why it’s Lynch’s thing. He does anything but the expected. In this ad for the Sony Playstation 2, the whole selling point is eschewed because who wants to see gameplay when you can watch this… whatever this is.

Getting Lynch to direct a 15-minute promotional ad for Dior was a masterstroke by the scent merchants. Even if you’re not remotely bothered about the swanky perfume on offer, it’s got Lynch, Marion Cotillard, and a hint of The Shining to it.