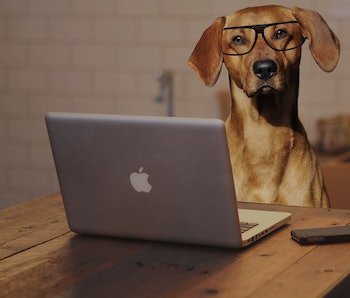 The times, they are a-changin’ when it comes to families.

No longer is the traditional family configuration a mom, a dad, 2.4 kids, and a pet.

There appears to be a trend towards men and women delaying marriage. Millennial women in their 20s and 30s have decided to stay single a lot longer than women did in the past. And instead of kids, they have pets. The new family profile today, indeed, may very well consist of a mom and Fluffy.

Employers, in the meantime, are clamoring to attract millennials. And many of those millennials are looking for pet-friendly workplaces.

Statistics reveal there are lots of dogs and cats in North American households. In the United States, the number of small dogs under 25 pounds has increased from 34.1 million in 2008 to 40.8 million in 2012, according to the American Pet Products Association.

In Canada, there’s an estimated 8.8 million cats and 7.6 million dogs. Over the past 10 years, cat and dog ownership has increased by about 10 percent. Approximately 41 percent of Canadian households now include at least one dog, and similarly, around 37 percent include at least one cat.

Look at the number of pets we’re now seeing in public places, with some owners citing them as service animals that help them with anxiety. We bring them to restaurants, to shops, we travel with them — we take them everywhere.

One woman from New York even recently tried to bring her pet peacock on board a flight as her service animal. She was denied this right for obvious reasons — the mammoth wingspan of the peacock.

Peacocks aside, perhaps, our pets are very much a large part of our lives.

Nonetheless, owning a pet brings with it a number of challenges that make it difficult to balance work and family.

What do you do with Fluffy when you go to work? Cats and other animals are pretty self-sufficient, but dogs need a little more thought in this regard.

There are pet owners who have the means to hire dog walkers or bring their pet to doggie daycare. Others aren’t as lucky.

And just like daycare centers, there are drop-off and pick-up times. If you’re late, no one’s going to report you to Dog Services, but you might have to pay for an overnight charge — obviously not an option with a child, so pets do offer us a different kind of freedom than children do.

But owning a pet can be expensive if you choose these options. Other options, of course, include going home midday to walk and feed a beloved companion, or having a friend or neighbor willing to take on this task for you.

Yet there’s another way to deal with work-family balance that is growing in popularity: taking pets to work.

This is fast becoming a sought-after perk that many employers are using as a new benefit — the battle for talent continues, after all, and employers have to compete in as many ways as possible.

As a longtime HR expert from Canada’s Goodman School of Business, in addition to being a devoted dog person myself, I know this raises a host of other issues, however. Your love for your pet might infringe upon the rights of others. What happens if your co-workers are allergic to Fluffy? Or scared of your beloved hound?

What happens if the office’s landlord prohibits animals on the premises? How about when a client who comes to meet with you does not appreciate your furry co-worker? Or if, in the middle of the meeting, Fluffy’s agitating for a quick walk?

As a small dog owner, I have a biased opinion because I love dogs and would be delighted to see a few at the office every day. Cats come a close second. But what happens if the pet your new co-worker hopes to bring to work is a snake, a rat, or even the famously grounded peacock?

What happens if that pet is loud and bothersome, jumping on everything in sight, or even chewing things it shouldn’t be? Those who do not love animals might be stressed out by their presence.

So now you have the prospect of workforces that are bitterly divided between those who love pets view them as stress-relievers and become more productive as a result, and those who feel just the opposite are stressed out having to be around pets they don’t like, and are producing less because of it.

A possible option for employers with a large number of dog people on staff is an on-site doggie daycare or a subsidy for daycare.

Whatever the option, most employers know they won’t be able to satisfy everyone, with or without a pet.

But make no mistake about it — workplaces are starting to grapple with the needs and financial pressures of their pet-loving employees, and want to ensure the long-term retention of a valuable staff.

My prediction? Expect to see more dogs and cats at the office in the years to come. Probably not peacocks, though.

This article was originally published on The Conversation by Deborah McPhee. Read the original article here.