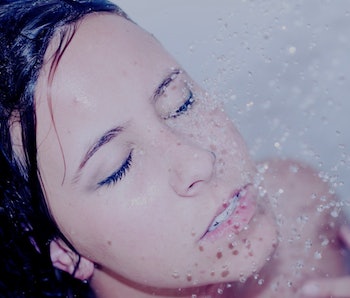 The relaxing steam of a hot shower is a true luxury — unless of course, those tiny hot water droplets contain a strain of infectious bacteria. In some places throughout the United States, this might be more common than we think, according to new research conducted by a team at the University of Colorado, Boulder.

In a paper published Tuesday in the journal mBio, the team shows evidence that shower heads in five regions of the United States had higher abundances of infectious strains of Mycobacterium lingering in their nooks and crannies — the bacterial genus that includes such nasty bugs as tuberculosis and leprosy.

Matthew Gebert, lead study author and research technician at UC Boulder, tells Inverse that these bacteria tend to coexist in shower heads with lots of other microorganisms in slimy networks called biofilms, which can get disturbed when someone turns on the tap.

These are the five regions identified in the study

And here’s how those bacteria survive for so long in your shower:

“They’re in the water itself, and they’re kind of collecting in there because it’s a good environment to live in,” he says. “When you turn your water on, what you’re doing is dislodging the community that lodged itself in there. It will be basically released with the stream of water.”

Gebert and his co-authors collected 656 samples of water from showers in the US and Europe, and they found that nearly all of them contained some type of non-tubercular mycobacterium (NTM) — over 180 different bacterial species in all. They were also able to identify, at least partially, where the bacteria came from: Homes that received municipal water tended to have higher amounts of bacteria in their shower heads compared to homes with well water.

Gebert suspects this is the case because these are tough little bacteria who can survive and thrive even in chlorinated municipal water supplies:

“Mycobacterium are incredibly hardy, they’re fairly resistant to chlorine and other common water treatments,” he says. And they didn’t get that way on their own. “We may be selecting for these bacteria when we’re treating our water which is leading to an increase in hardier bacteria and killing off those that aren’t so strong.”

Some of these NTM bacteria are responsible for lung infections, though Gebert adds this is most common in people with compromised immune systems, so these bacteria aren’t terribly threatening to most healthy individuals. But the paper does seem to indicate that shower heads might be a way these bacteria get into people’s lungs. Their analysis of National Institutes of Health data, in tandem with the water samples, found statistically significant correlations between the amount of shower head bacteria in a certain place and the rate of NTM lung infections there.

That said, Gebert urges people not to panic about the state of their showers. This is only a correlation, and most people with healthy immune systems can fight off an NTM infection, which is only caused by a few members of the vast mycobacterium family.

“I don’t think, for a healthy person, anyone should worry about the bacteria coming from their shower head,” he says. “I think what came across to a lot of people is that showers may be scary. So much of it is stuff we are exposed to every day. Being aware of it doesn’t necessarily make it bad for you.”

He’s not planning on cleaning his shower head anytime soon.

Bacteria within the genus Mycobacterium can be abundant in showerheads, and the inhalation of aerosolized mycobacteria while showering has been implicated as a mode of transmission in nontuberculous mycobacterial (NTM) lung infections. Despite their importance, the diversity, distributions, and environmental predictors of showerhead-associated mycobacteria remain largely unresolved. To address these knowledge gaps, we worked with citizen scientists to collect showerhead biofilm samples and associated water chemistry data from 656 households located across the United States and Europe. Our cultivation-independent analyses revealed that the genus Mycobacterium was consistently the most abundant genus of bacteria detected in residential showerheads, and yet mycobacterial diversity and abundances were highly variable. Mycobacteria were far more abundant, on average, in showerheads receiving municipal water than in those receiving well water and in U.S. households than in European households, patterns that are likely driven by differences in the use of chlorine disinfectants. Moreover, we found that water source, water chemistry, and household location also influenced the prevalence of specific mycobacterial lineages detected in showerheads. We identified geographic regions within the United States where showerheads have particularly high abundances of potentially pathogenic lineages of mycobacteria, and these “hot spots” generally overlapped those regions where NTM lung disease is most prevalent. Together, these results emphasize the public health relevance of mycobacteria in showerhead biofilms. They further demonstrate that mycobacterial distributions in showerhead biofilms are often predictable from household location and water chemistry, knowledge that advances our understanding of NTM transmission dynamics and the development of strategies to reduce exposures to these emerging pathogens.